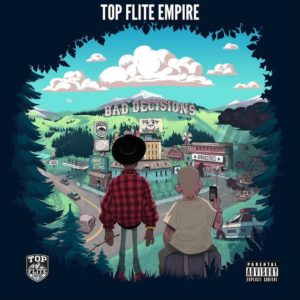 In the opening track of Top Flite Empire’s Debut LP Bad Decisions, they give the definition of a bad decision. It states that it is a “poor judgement, conclusion, or resolution reached or given. The act of making up one’s mind.” These words set the precedent and theme for the rest of the album both lyrically and sonically.

The Denver rappers consisting of Hypnautic and King Tef stated they create party music as it reflects Mile High City’s Rap scene and the whole of Denver’s vibe. One needs to look no further than perhaps the city’s biggest Rap act in 3oh!3. While they certainly have the energy, lyrical content, and vibe of the aforementioned group they execute all those ingredients for a concentrated mix.

After repeated listens of the album, it becomes apparent that Top Flite Empire are destined for bigger and better things. They have all the ingredients for superstardom with their talent and work ethic not to mention the quality of their songs. Standout tracks include “Loop N Joop”, which sounds like a crazy hybrid of pop tinged Schoolboy Q and Kendrick Lamar. “#Lit” crashes the ears with its Bay Area inspired beat and sounds like something Tech N9ne would be completely comfortable rapping over. “Party like M.I.A.” might be my personal favorite track as it is similar to Desiigner’s “Panda” which is a very good thing.

Guest appearances include King Los, Nef the Pharaoh, and Denver’s own Black Pegasus. and Trev Rich with production coming by way of Cheff Premier and DJ Kush as well as Dem Jointz who has worked with Rihanna and produced on Dr. Dre’s masterful Compton album.

If you want to support Colorado Rap, rattle the speakers in your car, and get #lit then listen to this album. You won’t regret it.