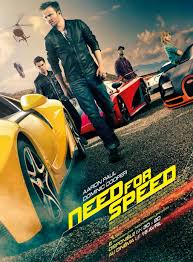 For the last few years, Aaron Paul has been known for playing a character whose catchphrase is, “Something-something-something, bitch!” Now that Breaking Bad is off the air though, he’s moving into film, and his first lead role in a Blockbuster is an adaption of EA’s car racing game Need For Speed. It’s not as horrible as other critics have portrayed it. Those that are into cars, such as myself, won’t be that disappointed, but it’s not perfect. Then again, it’s an adaption of a car racing simulator; no such film is aiming for high art. It is entertaining though.

Paul plays Tobey Marshall, a former racing driver out of New York State who’s now running his deceased father’s mechanic’s shop. His well-off rival, Dino Brewster, (Captain America’s Dominic Cooper) rolls into town and offers Tobey a well-paying gig: finish a Shelby Mustang that legendary tuner Carroll Shelby was working on with Ford before Shelby died. Marshall takes the gig to pay for a bank loan, but before he knows it, Tobey finds himself in jail due to a street race between Tobey, Dino and Tobey’s young partner Little Pete (Harrison Gilbertson) that gets Pete killed. Dino rammed Little Pete during the race and left him and Tobey behind, covering his tracks well enough so Tobey would take the fall.

Two years pass, Tobey gets out of jail with plans to avenge Pete. He gets in contact with the owner of the Mustang he completed, asking to borrow it to compete in De Leon, an illegal road race held by internet DJ Monarch (Beetlejuice’s Michael Keaton) which Dino participates in. With help from his crew and exotic car allocator Julia Maddon (Imogen Poots of the Fright Night remake) Tobey sets out to put Dino behind bars.

Let’s get this out of the way: Need for Speed is not The Fast and The Furious. Sure, there are some crazy stunts, such as the helicopter save and the jump over traffic in Detroit, but it’s not as blatantly physics-defying as the F&F series. Need For Speed, at its core, is a revenge film steeped in car culture. And unlike the Fast & Furious franchise, it’s not about tuner culture, which is rather played out by this point.

The film in general uses quite a few clichés in its storytelling and exhibits a couple of leaps of logic: Little Pete is annoyingly naïve and loose-lipped, pegging him as the guy who’s going to get killed and have his death avenged. Tobey is supposedly an incredible race car driver who somehow slipped through the cracks, even though his driving skill as demonstrated throughout the movie indicates he should at least be on a NASCAR track. Dino is an accomplished, wealth racer who everyone says isn’t as good as Tobey (Which Tobey himself acknowledges the ridiculousness of) and acts like an insecure prick around Paul’s character for no real reason beyond suffering from undiagnosed Small Dick Syndrome. Poots’ Julia, the car handler who sticks by Tobey in the Mustang on its trip from New York to the race in California, seemingly develops an attraction to him that comes out of nowhere. (That last one in particular sounds like either a studio mandate or lazy scriptwriting.)

Despite those issues, they don’t really take you out of the movie, because the whole plot of Need For Speed is designed to do one thing: set up awesome car stunts. Fast & Furious is known for crazy shit done with all things gas-powered, but Need For Speed dials it back to capture car culture at its finest. There is really not much in the film that’s too out-of-place (The Helicopter save and the Detroit Traffic Jump-Lane Change the exceptions.) and the stunts in general get right to the thrill of going fast on four wheels. The unique POV shots in the car during some of the hair-raising driving is particularly impressive, making me wonder just how they pulled that off without obstructing the driver’s view.

Paul and Cooper do well as the lead hero and baddie, though Paul seems to be channeling a more talkative, less morally ambiguous version of Ryan Gosling’s nameless anti-hero from Drive. Those expecting a stunt-driving Jesse should stay away. Poots’ Julia is alright, but doesn’t really seem to have much to do beyond falling in love with Tobey. Scott “Kid Cudi” Mescudi is really entertaining as Benny, Tobey’s personal traffic reporter, but Rami Malek owns the film as crew member Finn, who quits his cubicle farm job to join Tobey in the most revealing fashion. Keaton also nails his performance as Monarch, giving the movie a level of enthusiasm and energy that makes Need For Speed a fun B-Movie instead of just a B-Movie. 6/10