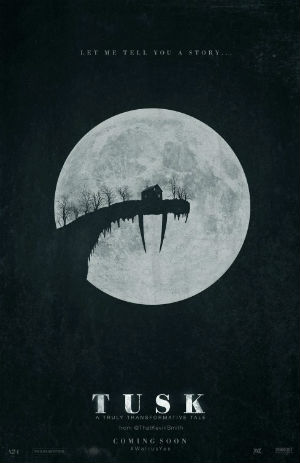 When I was younger, I willingly sat through three Saw movies without flinching. I have a deep appreciation for the likes of Evil Dead, Halloween and Videodrome. However, it has been a while since I’ve seen a horror film, and walking out of one recently made me question if I’ve gotten soft as I’ve grown older.

And the man responsible for it? Silent Fucking Bob.

The man who made Clerks and gave voice to a generation of listless youths, (and still does, to a degree) Kevin Smith’s last two outings in the theater have been Red State and Tusk, a pair of horror movies that one would’ve never expected from the guy who made films where Alanis Morissette was a God and Mark Hamill played a supervillian called Cock-Knocker. Smith’s last known comedic entry was Cop-Out, a Bruce Willis and Tracy Morgan vehicle that Smith didn’t write – a career first for him – and that left much to be desired. If Tusk is Smith’s way back into filmmaking, I would not be opposed to it. This is possibly Smith’s best film to date.

That said though… Holy Fucking Shit, Kevin Smith made this?

Tusk follows Wallace Bryton, (Justin Long) a Los Angeles-based podcaster who travels to Canada in search of a viral video star known as “The Kill Bill Kid.” (Imagine the Star Wars Kid from years ago, only with a real katana.) Upon arriving, he discovers that the kid died, and with the kid went the subject of his podcast, The Not-See Party. Wallace’s podcast is based on him tracking down weird/interesting people and retelling their tales to his partner, Teddy Craft, (Haley Joel Osment, A.K.A. “I See Dead People”) who never leaves Los Angeles. Wallace is not leaving the Great White North without a subject for his next show.

He finds an interesting subject in Howard Howe, (Michael Parks, a Tarantino staple and the villain from Smith’s Red State) an old seafarer, out in the middle of nowhere, who regales him with tales of meeting Ernest Hemingway during World War II, and finding himself shipwrecked with only the companionship of a walrus Howe named Mr. Tusk. That’s as much as Wallace hears… before passing out.

Howe soon reveals to Wallace that he’s a misanthrope who wishes to turn Wallace into a walrus. He cuts off his legs and turns the bones into tusks to be implanted in Wallace’s face… and I’ll stop there.

This film started out as a classified ad (later found out to be a hoax) that Smith and his friend/producing partner Scott Mosier read on an episode of Smodcast, which the pair promptly turned into a horror movie pitch. (The original ad offered a place to crash for free if the person in question dressed as a walrus.) Having listened to Smodcast for years, I knew that Tusk would probably be a horror-comedy – the premise is a bit ludicrous for a straight horror film – and the film has its funny moments, but the film cranks up the creepiness by a factor of ten. It’s amazing to think Smith could craft something this horrifying.

The acting helps sells the horror of the situation. Parks really pulls off Smith’s trademark dialogue/monologues, and the gravity he brings to Howe helps plant the character as an out-and-out misanthrope. He does make the character a little sympathetic – Howe’s misanthropy comes from being an abused orphan – but Parks plays Howe as a man who doesn’t know he’s a crazy bastard.

And then there’s Long. I’ve been watching Long since his days on the TV show Ed, and he’s always kind of played awkward dweebs and losers. Here though, he plays one of those awkward dweebs who got successful. Flashbacks reveal that Wallace is a bit of an asshole, that the success of the podcast has gone to his head; at one point he refers to his past self as a loser who tanked every open mic night at comedy clubs. His past self managed to snag Ally, (Genesis Rodriguez) but his current self has driven her and Teddy together while he bangs Not-See groupies and mocks his podcast’s subjects. But when he’s undergoing – and completes – his transformation into Mr. Tusk, you still feel for the guy. Because… let’s face it, he gets mutilated and terrorized into becoming a goddamn walrus by a fucking psychopath! The last shot you see of Wallace is absolutely heartbreaking in that regard, because there’s still a little bit of Wallace inside Mr. Tusk but there’s nothing he can do about it.

This is Smith’s best film in a while, but it’s not without fault. This film does have a weird, awkward pacing to it, and it mostly comes from scenes of comedy trying to balance out the horror scenes, particularly in the latter half of the film; it’s kind of uneven and causes the film to drag at times. (This is really obvious during the scenes with French Quebec ex-cop Guy Lapointe, plays by an unrecognizable Johnny Depp, but that could be the awkwardness of the character leeching into the film. Seriously, Depp – who I never recognized – can do awkward like no one’s business.) But that’s really the only issue with it. Everything else about Tusk is actually really good. I could go on, but I’d just be spoiling more of the film. See it in theaters while you can.