First off, Riot Fest was awesome. There is no other way to say it, after it’s all said and done and the people have their say about what went well and what didn’t and ask the ultimate festival question of if it was worth the ticket price, Riot Fest was still awesome. To see this particular line up whether you grew up listening to them or not was something everyone there knew would only happen a few times in our lives. To see The Flaming Lips then literally turn around and see Primus begin made me wonder, where the hell am I?

Taking place at Sports Authority Field, for the people who attended the year before it was a welcome change from Byers where the crowds faced heat during the day and the cold at night. This year, under the massive image of our Lord and Savior Peyton Manning, Riot Fest became a city festival and it fit. With as many as 38 noise complaints filed, several Denver residents were not too thrilled with its new location but with fewer incidents than a Broncos game and Reverb quoting Sports Authority Field at Mile High’s general manager Andy Gorchov saying, “Without question this was the most well mannered and well behaved crowd of all music festivals we’ve had,” it’s likely Riot Fest will be back in that parking lot next year. Maybe it will be quieter? Doubt it. 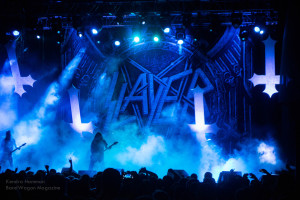 The first day saw the performance of many notable acts such as Die Antwoord, NOFX, New Found Glory, Primus, and Weezer, the festival started off strong. One thing became obviously right from the jump was this was going to be a fast paced festival. With no set breaks between stages, as soon as one band ended the next started minutes later at a different stage.

The stand-out shows of the night were without a doubt The Flaming Lips and Slayer. Both bands proved that you don’t have to be a band with Top 40 hits to not only stay relevant, but also maintain a fan base that is worldwide. During the Primus set that coincided with Slayer’s, Les Claypool told his audience, “Attention everyone. You are standing in the wrong area. Slayer is playing over there.”

Weezer doing the full album thing was cool, Manchester Orchestra brought down the house, and the weather was perfect. 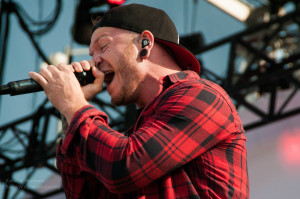 During the evening City and Colour mellowed out the scream of The Used while Social Distortion the “punk godfathers” were greatly identifiable rocking “Ball and Chain” as well as “Ring of Fire.” Headlining the show, each one of the Cure members rocked Einstein inspired hair and original 80s punk black clothing playing all their top-hit songs from their 13 albums.

A Day To Remember was by far the best act of the day. The band came out with “The Down Fall Of Us All” accompanying the blast of patriotic colored confetti. ADTR even lead the crowd of metal enthusiasts in a peaceful session of “The Macarena” while lead singer Jeremy McKinnon crawled in a human hamster ball asking, “Denver, don’t let me die,” before making his way on top of the hundreds of hungry hands. 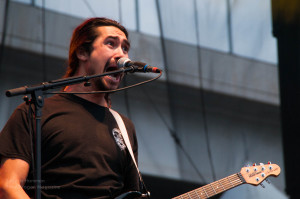 Day three of Riot Fest ended on a slightly rougher note but not a bad one. Once the cold September rain began in the evening it didn’t let up making the event for those unprepared a real trial to see how dedicated they were to their favorite bands.

A few crowd favorites were definitely Rise Against, TV on the Radio, and Wu Tang Clan. TV on the Radio played at the perfect time right before the novelty of the rain wore off. By the time the closers The National and Wu Tang Clan went on everything was pretty much soaked thoroughly causing sound issues. The National were clearly not pleased with their set and the dwindling crowd but in the crowd’s defense Wu Tang was playing at the other stage.

Around 20,000 people came for the three-day festival catching more than seventy bands from across the rock spectrum. From Wu Tang Clan to Slayer (I don’t care what you say, Wu Tang is rock) Riot Fest captured the essence of the late ‘90s and entire 2000s and it paid off.

Was it worth the price? At $180 for general admission you have to really want it but most the people who made the stretch for tickets went in knowing these bands together in Denver at the same event would only happen once in a lifetime. Some called it Nostalgia the Festival, some called it Warp Tour’s mid life crisis but I call it just plain awesome.