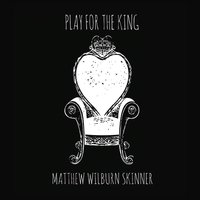 Matthew Wilburn Skinner makes up one-third of the band Tallgrass, picking up the banjo and guitar, playing the harmonica and contributing his raspy vocals to the band. Tallgrass managed to nab a spot on NPR’s Tiny Desk Contest as well as share a stage with former President Barack Obama. Skinner is a solo performer and earlier this year put out Play For The King, a perfect showcase for his Delta Blues/jazz style of playing.

While this is his debut solo album, it doesn’t sound like it. The fifteen years Skinner spent practicing his craft as both a sound engineer and a musician is quite evident. The albums was mastered by Butch Jones at Beathaven Studios, but Skinner mixed and recorded it, as well as performing and writing every song except “Wayfaring Stranger.”

It is seemingly an all-acoustic affair. If there is digital instruments being used, I couldn’t tell, so if there were any digital instruments used, it’s only a testament to Skinner’s talent as a sound engineer. The all-acoustic sound gives Play For The King a refreshing, warm sound in comparison to recent folk-inspired albums we’ve listened to. Skinner’s banjo-picking is methodical and slow, not sloppy or rushed, which allows the listener to sink into the music and Skinner’s lyrics and voice, like a comfy recliner or a warm bed. Skinner’s voice is a little more raspy and country-ish than, say, Arlo Guthrie, but he exudes both a warmth and a well-earned weariness in a way the early work of Guthrie doesn’t. Listening to Play For The King, you get the idea that Skinner enjoys life, while Guthrie was a little ambivalent, if not cynical, of life.

In total, Play For The King is an excellent folk album. For those looking for a well-crafted, full-bore folk album with soul, Skinner’s debut solo album is the pick of the litter.