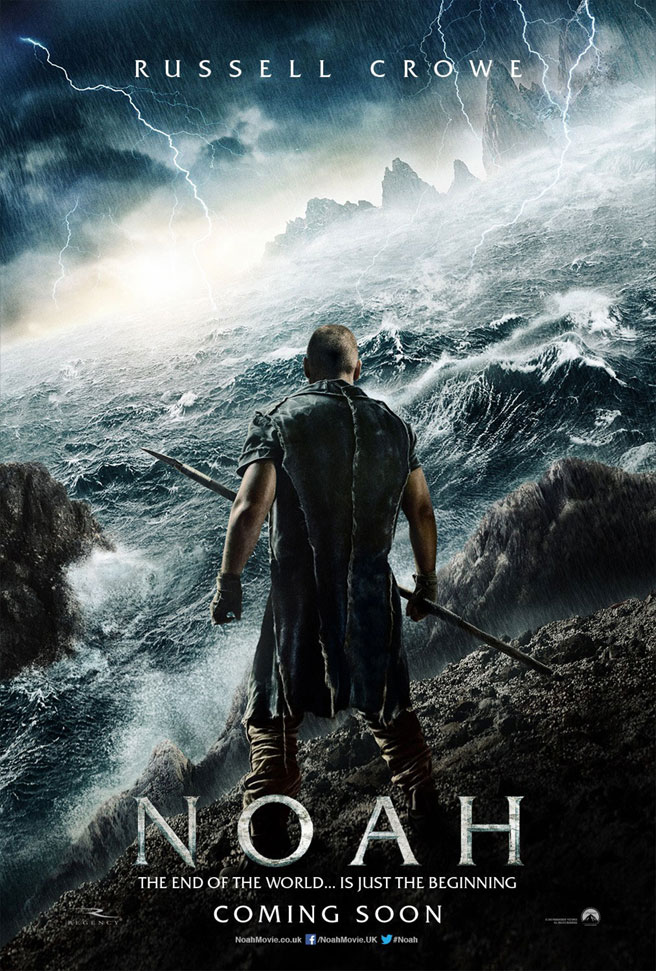 If one were to compile a list of directors that would be a suitable fit for a Biblical epic, Darren Aronofsky likely wouldn’t rank very close to the top at first glance. With his topics ranging from drug abuse (Requiem for a Dream) to fatally fame-obsessed delusional ballerinas (Black Swan), a story from the Bible doesn’t exactly fit into that class. But one needs look no further than a smaller, earlier film called Pi, in which a man was struck with the unflinching belief that the number 3.14 was a message from God detailing the apocalypse. It’s interesting then that Aronofsky’s latest film, Noah, is about a man speaking to God about just that topic. And what a film it is.

Noah is one of the Bible’s most recognizable and iconic stories. God, fed up with humanity’s wickedness, decides that He will flood the Earth and wipe out humanity. He instructs Noah (Russell Crowe), a devout human servant, to build a massive ark containing Noah’s family and two of each kind of animal, to survive the flood and repopulate the earth after. The story comprises four chapters in the Bible, hardly enough to fill a two hour movie. Therefore, this Noah is a man that struggles with survivor’s guilt, following the instructions given to him, and general existential drama, to surprisingly effective results.

Other creative liberties are taken as well, such as the presence of the Watchers, massive stone beings fallen from heaven. The story adds a villain in the form of Tubal-cain (Ray Winstone), descendent of Cain (who murdered his brother Abel) and king of the area, hell-bent on killing Noah and taking the ark for himself.

Aronofsky’s trademark is robust, striking imagery, and he continues that trend here. Dream sequences exhibit powerfully unsettling apocalyptic scenes, while a Creation retelling shoots through space and across the Earth as it blends CGI with breathtaking time-lapse nature photography. , if nothing else, is a feast for the eyes and one of the most visually striking films of recent memory.

Clint Mansell is on a literally baffling hot streak. The composer has not once composed something any less than outstanding, and he outdoes even himself with this score, which may be his best work yet. Noah’s soundtrack is by turns sweeping, somber and foreboding.

Noah will offend many. Those narrative flourishes are already stirring up controversy, and certain circles are calling for a boycott. Few of these liberties are really all that offensive, and a bit of research confirms that most of them have scriptural basis. Noah himself is a bizarre (though effective) amalgamation of Judeo-Christian influences, Islamic strokes, and environmentalist characteristics, but what every textual account of Noah has in common is a man faced with a hugely stressful task. Noah deals with that as well as the psychological aftermath.

So who should see it? Really, anyone can. One of the film’s greatest strengths is the respect is has for religion and for the text, never scoffing at the themes of the story while also not attempting to push an agenda. Aronofsky, a noted atheist, has made a film that simply accepts the possibly of a Creator in the boundaries of the story, including themes strong enough to resonate with the secular crowd, and tailoring it to his own remarkable visual style. Bravo.