For those interested in dance and local filmmaking, The Kress Cinema and Lounge will be premiering a short film on Saturday, April 12th titled Light in the Dark. The short, directed by Greeley resident Casey McConnell, was inspired by a choreographed dance by Wendy Klein of the Colorado Dance Collective, which McConnell expanded upon.

“[Klein] and her company spent a year, year and a half choreographing and putting this piece together,” McConnell said. “And we’re friends and she asked me to film it, just so they had it on film for the girls and herself, and one thing just lead to another and it morphed into this short film, and so we took this choreographed piece and then made a story out of it and made it quite a bit bigger.”

Light in the Dark is based off of Schindler’s List, specifically the film’s music the dancers originally choreographed the piece to.

“We took it a little bit further,” McConnell said, “and Sigorney [Moore, music composer] is kind of taking that score and is alternating it a bit so it’s a little more up to date.” 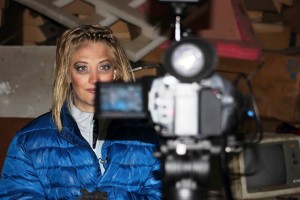 McConnell described the film as somewhere in between a music video and a musical a la The Nutcracker, where the music and dance move the story forward.

“We actually had seen a video that was done in Iceland,” he said. “It was actually a musical group, and they gave away $25,000 to every director and they had eight directors all over the world come and just create. We had all saw this ballet one and it was just beautiful. It was in this old building, and so that was kind of the emphasis of where this all started. I don’t really know what to call [Light In The Dark]. It’s a short film with dance, with music, trying to tell a story, there’s no verbal speaking or anything. The music and dance carry the whole story.”

Among those helping McConnell and Klein were Moore, a local music teacher and harpist who McConnell came across by chance.

“I was at the Cranford Cove Tea Tavern one day, and she happened to be playing there that day,” he said. “I was in there and I just thought, ‘Wow, what a talented girl.’ So we connected then, before even Light in the Dark came on the radar. I just said, ‘Well, let’s get together sometime and just talk and see what you’re up to.” During that time, we ended up – Wendy and I – putting this together and I was like, ‘Let’s bring Sigourney into this; she’d be perfect to play this role.’ So she jumped right on board and, so yeah, it worked out.”

Moore not only acts as the film’s composer, but McConnell said she also plays a role in the film as a “dark kind of figure who transforms through the piece.” Katie Ahl is the lead actress, with the rest of the cast rounded out by Stephanie Wilson, Kynsi Saye, Brynne Gaffney, Kaitlee Marshall, and professional dancer Brandon Freeman.

“[Freeman] dances at Wonderbound. We connected through Facebook and I told him what we were up to and he said, ‘Yeah, I’ll be a part of this,’” McConnell said.

McConnell said he has been playing around with video since 2005. He was previously the marketing director at a health club in Aspen, saying he normally worked with people on projects. 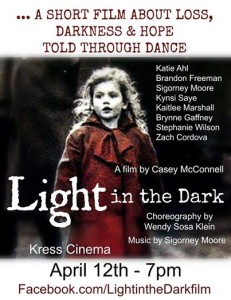 “In the last year and a half, I’ve kind of moved behind the camera and want to edit,” he said, “have the finished product be a little bit more with what I was thinking in my head, instead of always trying to explain it to somebody else.”

McConnell still works as a marketer, owning his own company called Qittle which specializes in marketing projects for businesses and non-profits. However, McConnell said he does have a couple screenplays he would like to work on in the future.

For more information on Light in the Dark, including their April 12th premier at The Kress, visit their Facebook page at http://www.facebook.com/lightinthedarkfilm, and at http://qittle.com.