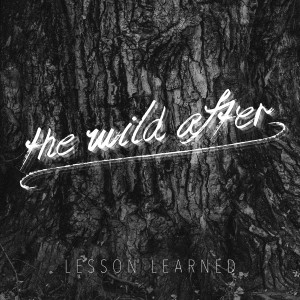 People who consume music on a casual basis don’t realize what a strange process it is to start a band. Local acts are constantly splitting, joining, or reinventing themselves. So when former members of The Heyday, Randall Kent and Ryan Buller, teamed up with a new rhythm section comprised of Jesse Spencer and Chris Beeble in October last year, it wasn’t anything unusual. What is unusual is the remarkable sounds they’re making in such a short time together. Their new EP, Lesson Learned, is releasing late March. Fortunately we got a streaming preview to let you know why you should check it out.

The first thing that stands out about The Wild After is their musicality. This is no high school garage-band; each song has a sense of purpose and every line seems well thought out. Each song has a real melody to it, and each track nails the sweet spot between polish and authenticity. Clearly the cumulative experience of the band’s members is contributing to the whole, making it greater than the sum of its’ parts.

The title track, “Lesson Learned”, is a solid pop-rock tune. It turns expertly back and forth between a sweet melancholy and an anthemic chorus that you want to sing along with right away. Each instrument balances with the others, despite the full layering that most groups struggle with.

The next song slows it down with a waltz-y ballad. Randall manages to express a universal falling-out-of-love experience in “Ocean Floor” with unique lyrics such as “There’s no use trying to fight it anymore/ Like trying to set fire to the ocean floor/ We’re just not in love anymore”.

“Meant For You” brings out a little of the country twang that’s been just under the surface on this EP. This song sounds familiar, yet new – with a melody that naturally flows through the lyrics. It’s difficult to tell if you’ve heard it before or if they’ve just pulled the natural music out of the words. A guitar solo that complements and references the song without trying to steal the spotlight completes this well rounded song, which blends into the next. “Old Familiar” reminds the listener of an old memory, that sepia-toned nostalgia that you get when you lay under a tree in the summer sun.

The closing track, “The Ship and the Sea,” drifts off in a dreamy folk-flavored haze. Just when you think you know exactly where the song is headed, a creative chorus lifts you briefly out of yourself before drifting slowly back into the finger-picked trance. It’s a brilliant ending that leaves you feeling settled but wanting more.

Lesson Learned is a fantastic collection of songs. If I wanted anything else, it would be another upbeat rock track like “Lesson Learned,” but I’m sure The Wild After still has something up their sleeves. An EP this good, right off the bat, is a rare thing. I can’t wait to see what these guys are doing next.