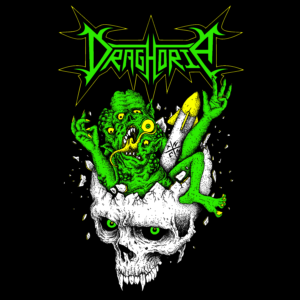 is a multi-generational metal band from Greeley with a recurring theme that describes their music to a tee – thrash metal. The follow up to their first EP, appropriately titled Thrash AD, will be released during Downtown Greeley’s 12th annual Block Party this month (via Sweden’s Big Balls Production) undoubtedly to a room of sweaty kids in black shirts that beat up their friends for fun, but pick them up when they fall.

Draghoria stay true to their metal roots with blistering blast beats, ear-shattering guitar, and vocals that awaken a listener’s inner, pent-up aggression. They’ve truly made their mark as one of Northern Colorado’s leading metal bands since their 2011 inception.

The title track to the new release sonically kicks you in the face right out of the gate. With 1000 mile-an-hour guitar riffs and double kick drums, spiced with triplets, a shouting, chanting chorus, and wailing guitar solo, Thrash AD certainly pays homage to the likes of early thrash metal kings such as Anthrax and Exodus.

Another notable track from this, their second 2018 release, “Taste of the Serpent,” is a marriage of Lamb of God’s instrumental style with Ronnie James Dio’s lyrical themes. The track features the technically mind-blowing, acrobatic guitar of Ron Carrillo and a thunderous double-bass beat via his son (drummer Alex Carrillo) – a combo that’s sure to get the adrenaline flowing. Paired with topics reminiscent of the fantasy-laden compositions of bands like Dio, Iced Earth and Iron Maiden, Draghoria wear their influences on their tattooed sleeves.

Draghoria’s music is the sonic equivalent of being hit by an 18-wheeler, but they also serve as a generational heavy metal history lesson. Bringing classic thrash metal back to the forefront with an updated, next-gen brutal attack for 2018.