Legendary comedian and performer Gallagher was on his way to a gig in mid-August when he heard it was Elvis week in Graceland. This inspired him to write a song about Elvis, a tune he planned to perform two days later in Huntsville, Alabama.

He had the lyrics, what he called a poem, but he was toying with how to set it to music. His traveling companion that day suggested gospel, but Gallagher wasn’t sure about that. He was also a little irritated because he was just talking about “Loverboy,” a superhero movie he wrote with Will Ferrell in mind, and said companion kept interrupting. This sparked the kind of angry energy that’s defined Gallagher for decades besides iconically smashing watermelons on stage. “SHUT UP SHUT UP SHUT UP,” he said to his companion.

Gallagher didn’t know if he would smash watermelons at the Alabama gig. It would take place in the Von Braun Center, and when he plays shows in places with fancy names such as that, the places that sell wine in the lobby, or in front of seniors, he leaves out the famed routine upon request. He knows that’s like going to see Led Zeppelin and not hearing “Rock and Roll,” but he doesn’t mind. 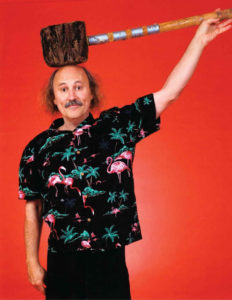 As tempting as it would be to cull from his many stand-up comedy shows on Showtime or his fame as one of the more well-known comics of the 1980s because he smashed stuff on stage, Gallagher doesn’t want to rehash those gags or rely on a bit that he’s performed thousands of times. He couldn’t work that way.

“I actually perform because I write,” he said in a phone interview. “I have to put it somewhere. I write for the stage.”

Even after 4,000 shows, Gallagher doesn’t follow a script. The show he performs with comedian and actor Artie Fletcher, in fact, has no script, just a general roadmap that allows Gallagher to feel out an audience. The two improvise many of the jokes.

“You can’t have one show you do everywhere in America,” Gallagher said. “New York is a whole lot different than Memphis. You have to be versatile. I’m a fisherman and a scientist trying different baits. Only a fool would stick to a script.”

Gallagher probably has the most active Facebook page of any comic, Fletcher told Bandwagon, partly to curb Gallagher’s desire to create. Fletcher said that Gallagher sometimes wishes he could be known for his expansive mind and not the hammer he wields to smash fruit.

“It bothers him that people don’t know that’s only one dimension of him,” he said. “Smashing is at the very end, and that’s more of a tribute to his fans.”

Gallagher feels out his audience by talking about spoon forks, commonly called “sporks,” and how that reflects America because “we do two things at once, and we’re not good at either.” He talks about “how men are made of dirt, and women don’t want dirt in the house.” He isn’t a political comic, even if he’s a known conservative who loves poking liberals. He has some Obama jokes, but he doesn’t mind poking Trump either.

“I like to put my hair all in the front and say, ‘I love Mexicans no matter what country they came from,’” he said. “That’s a good example of him. He doesn’t even see it.”

Gallagher will play a 2:30 matinee and a 7 pm show on Sunday, September 16 at the Moxi Theater, which, as cool as it is, is not an art center. It’s a concert venue, which means Gallagher can make a mess. After a long career being known as the comic who smashes watermelons, making a mess still makes him happy. “Just when you’re tired of laughing, we get to do that,” he said, “and it is just so, so much fun.”