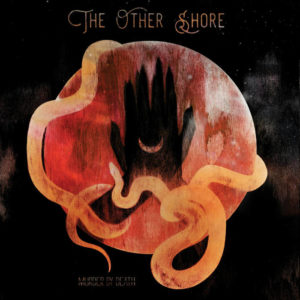 It would be easy to think of Murder By Death as a local band. Though founded in Bloomington, IN and currently based out of Louisville, KY, the group is a frequent and welcome performer in Colorado. In 2014, Murder By Death was the first Rock & Roll act to play the historic Stanley Hotel in Estes Park; this year, their fifth annual winter residency extended to five sold-out shows.

As much as the American Gothic sound of Murder By Death fits the open prairies and rugged mountains of Northern Colorado, it is equally out of this world. It’s fitting, then, that their latest studio album, The Other Shore is a space western.

Yeah – it’s a concept album. But it is a concept album from a band capable of world-building and it’s as atmospheric and evocative as a literary novel. Newly released via Bloodshot Records on August 24th, The Other Shore is not Murder By Death’s first concept record, but it may be their best. Each song stands alone as a strong composition, yet each song contributes to the overarching story.

For fans of MBD’s haunting ballads like “Lost River” or “Foxglove,” The Other Shore starts off with the beautiful “Atlas” and delivers again with “Only Time.” Those that appreciate the feet-stomping sing-along nature of “Brother” or “I Came Around” will love the songs “True Dark” and “Stone,” but it’s not all been there, done that. Murder By Death continue to push boundaries and explore new sounds on The Other Shore – the tracks “Bloom” and “I Have Arrived” in particular, have an unexpected almost 80’s era feel.

The Other Shore is a great addition to Murder By Death’s discography. If you’re not already a fan, this is as good a starting place as any of their prior albums – but the best way to be introduced is by seeing them live – good thing, then, that Murder By Death will be performing at Washington’s in Fort Collins on Friday, September 21, 2018.