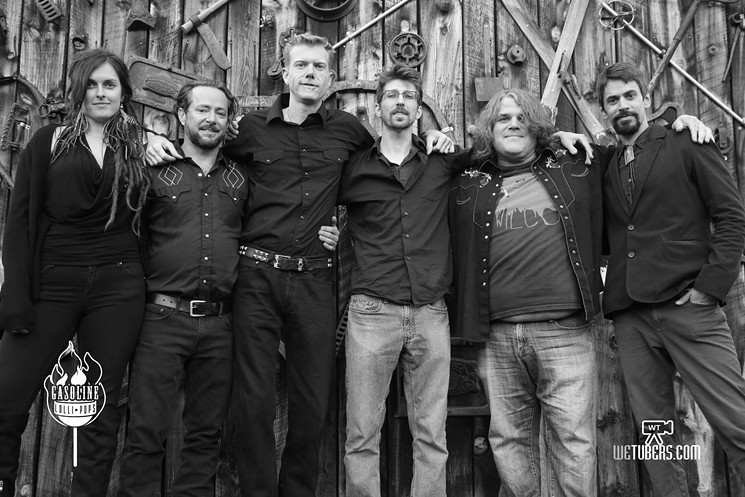 In July, I received an email about the Kickstarter campaign for Soul Mine and discovered not long after that it exceeded its initial goal of $10k. How quickly did that campaign meet its goal?

It was a 30-day campaign and miraculously our fans met the goal well before the 30 days expired. We had a good time making little videos from each band member in the studio, in the mountains, and even during one of my bike rides up to Jamestown, thanking everyone and giving the status of the campaign and the recording. Even with our tiny home studio, it’s incredibly expensive recording and releasing an album— especially on vinyl— and the money we raised was genuinely just the bare bones expenses for an engineer, some equipment upgrades, and mixing, mastering and manufacturing the new album. Remember also that Kickstarter takes a chunk after you meet your goal, and we have to factor in the cost of those items we sold on there, such as tickets to the Aggie Theatre show in October, t-shirts, tattoos and lots more. I can’t stress enough that Soul Mine would not be possible without the generous Kickstarter donations from Gasoline Lollipops fans, who are amazing

It’s common knowledge that CDs are just business cards at this point. Mostly because people buy them a show to support musicians they love, not because CDs or necessities. CDs sound about the same as MP3s and don’t have much room for art, let alone the sweet stickers and posters that used to come with the vinyl album so frequently. I’ve been a hardcore vinyl collector ever since the thrill of finding a $1 copy of the White Album out of Pittsburgh thrift store as a teenager, complete with the four 8×10 photos of the band and the huge fold out poster. When you combine the tangible feel of holding a record in your hand, looking at the art and dropping the needle on it with the reality that the sound quality is out of this world— I remember listening to Astral Weeks as a kid and feeling like the band was in the room with me— yes, it’s always been a goal to release a vinyl Gasoline Lollipops album, and I can’t wait to hear it and share it.

What were the big challenges of putting together Soul Mine, aside from running short on funds to complete the album?

Time is always the number one challenge, the “thing all things devour.” Clay and I are always coming up with ambitious madcap ideas for places to play, thanks to pull off on stage, cover songs, etc., and it seems like the only way they actually happen is to have a deadline. We thrive on deadlines. So when I booked us at the Fox Theatre in Boulder for Saturday, December 16 and suggested we put out a two-song vinyl record at the show, of course Clay texted me a photo of a list of songs to go on the record. There were a dozen, and they were almost all new. With the crazy amount of time it takes to manufacture vinyl, we knew we only had a few months to rehearse, record, mix, master and manufacture Soul Mine, and Clay hadn’t even written the title track yet. But pressure makes diamonds; hence a summer spent working in the soul mine. Like everything, Soul Mine is really Clay Rose’s baby, and he’s put an incredible amount of time into what I know is going to be a great Gasoline Lollipops record.

In comparison to previous albums, what did you guys do differently/experiment with/improve upon with Soul Mine?

I think Clay had more control of the artistic vision, especially the mixing and arrangements, on Soul Mine then on previous Gasoline Lollipops stuff. He’s been spending something like 20 hours a day in the studio since we finished recording the basic tracks, and the stuff I’ve heard so far sounds incredible. The record has a breadth of direction I’m very excited about, and a bunch of the songs are a little more rock ‘n’ roll than anything the GasPops have done before. People will be hearing Clay on electric guitar for the first time, and far less country beats, and the song Soul Mine is a really beautiful, weird mixture of Tom Waits, Leonard Cohen and Johnny Cash. There’s even a truck that’s just acoustic instruments, and no drums, around one microphone, and it’s wonderful.

Any particular reason you chose the Fox Theatre to release the album?

We all live in the Boulder area and the Fox Theatreis the best venue in town, no contest. Rolling Stone named them the number four club in America for a reason. They really took a chance on us for our Valentine’s Day show earlier this year and our amazing fans packed the place on a freakin’ Tuesday night, so we really want to show gratitude to everyone involved and have a big ol’ Christmas love fest. We are pumped to share Soul Mine with everyone and have a whole slew of surprises in store for our set that night, but my lips are sealed for now.

Any plans on touring following the album release?

We’re playing in Belgium and the Netherlands for a few weeks just before the Soul Mine release show, and returning to Belize for two shows in January, but a longer stretch of shows around the United States is in the works for sure. Stay tuned.

Make sure to catch Gasoline Lollipops at their release at the Fox Theatre Sunday, December 16.