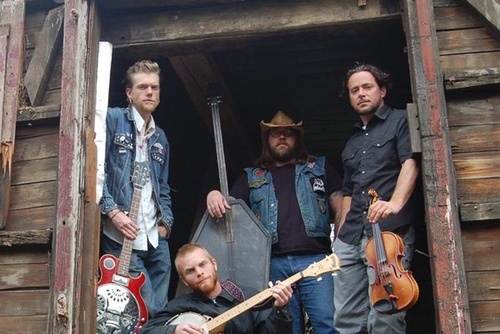 According to Clay Rose, lead vocalist and acoustic guitarist for Boulder-based Gasoline Lollipops, it took him about 30 years to put together their first album, Dawn.

“Then it took about one year to record it.”

Gas Pops has been around since 2010, and has only two albums to it’s name, the most recent being Death, released in 2014. Backing up Rose is Donny Ambory on the electric guitar, “Bad” Brad Morse on an upright bass and drummer Adam Perry. Rose said via email that he had been playing on street corners and public commons for about 10 years before the Gas Pops came together; playing mainly folk-punk protest songs and heartbroken suicide ballads. Those years and experiences show themselves in Death, a relatively somber album that possesses a high level of energy not found in throwback country/classic country/folk albums.

Death, released in 2014, is a second installment in what Gasoline Lollipops calls the “Lucky Seven” trilogy. Their first album, Dawn, explored “the sometimes violent birth of hope,” while Death “explores all things impermanent,” including the album’s namesake. The first couple of tracks, namely “Death” and “Devil’s in the Ace” bring to mind a hyperactive Johnny Cash who might’ve spent time in a punk/metal band. On “Devil’s in the Ace,” Rose’s voice goes back and forth between a deep, melodious country singer’s voice and a metal band frontman’s guttural growl, which can throw you off a little.

Gasoline Lollipops calls itself an Alt-Country band, though Rose himself said he doesn’t do the same.

“Someone might, but I’m loathe to call it anything other than music,” he said. “In fact, I hate being asked what kind of music I play. I have no idea. It changes from song to song. If I think of myself as an ‘alt-country’ songwriter, what am I to do the next time a sea shanty or a punk song come knocking on my brain? I have an open door policy for all unwritten songs, from any and all genres.”

Gas Pops’ folk flag waves noticeably in “Failed Bed Frame,” while “Fast Train” sounds much like a mellow punk song done with a country band’s instruments.  “Nashville,” not surprisingly, is the most Country song Gasoline Lollipops has on Death, twang and all. When it’s all said and done though, Death is very much a folk-punk album that, on occasion, possesses a hint of country influences. So if you’re looking for a folk album with an edge, Gas Pops has it.