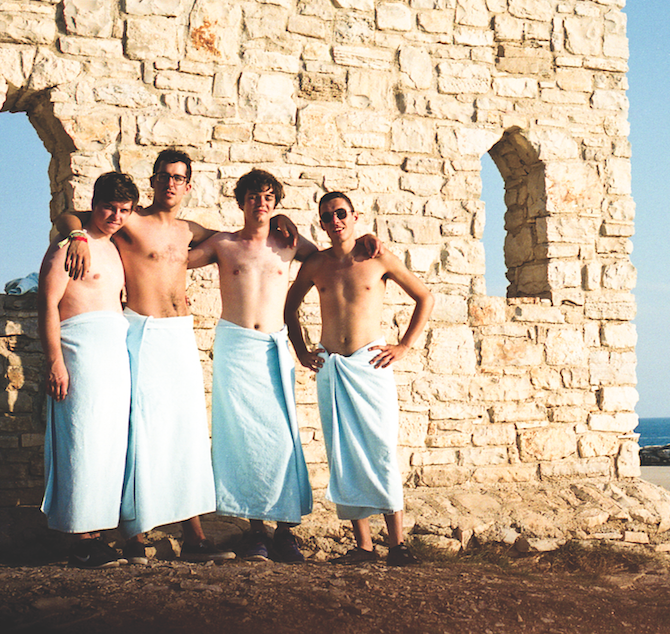 Canadian Jazz collective BADBADNOTGOOD is currently comprised of four dudes— Matthew Tavares, Chester Hansen, Alexander Sowinski and Leland Whitty. Since emerging in 2010, they’ve inched their way towards notoriety with albums like 2011’s BBNG and the aptly titled BBNG2, which they released in 2012.

In 2015, a collaboration with Wu-Tang Clan legend Ghostface Killah — Sour Soul— really seemed to cement their credibility, and before they knew it, they were making tracks with Snoop Dogg.

Now on the heels of BADBADNOTGOOD’s sixth proper studio album, 2016’s IV, which featured contributions from Future Islands’ Sam Herring, hip-hop artist Mick Jenkins and producer Kaytranada, the group has hit its stride. Incredibly (and not too uncommon leave these days), it all started with YouTube videos… and a lucky cosign from Odd Future’s Tyler The Creator.

“We started by recording an off-the-cuff video of us jamming together on a couple hip-hop covers, and the response was really crazy,” Hansen says. “We had no idea people would check it out, so it was a huge surprise that people found something they liked in us just goofing around. After that we kept putting stuff out, having fun and trying to work hard.”

Once Tyler The Creator saw their video, “The Odd Future Sessions Part One,” he gave them the support they needed to go viral. Although they routinely record with various vocalists, instrumental music has always been their specialty. Seven years ago, Tavares, Sowinski and Hansen met through the jazz program at Humber College in Toronto. It was through this shared love of jazz that BADBADNOTGOOD was born.

“We all went to jazz school and have a huge appreciation and love for instrumental music, so I guess we always have [gravitated towards jazz],” he says. “We also love playing and recording with vocalists, but at our core, we are instrumental.”

Earlier this year, BADBADNOTGOOD would team up with the Doggfather himself, Snoop Dogg, for the track “Lavender.” The subsequent video garnered a response from President Donald Trump, who scoffed at his mock assassination depicted in the visual.

“[Working with Snoop Dogg] came about just from him posting a video of him smoking on his Instagram to one of our songs [laughs],” he explains. “Then eventually, we found out he wanted to use Lavender for his own song and we were stoked. We actually don’t have anything to do with the making of the video, but the attention was insane.”

He adds, “Unfortunately we haven’t met him [Snoop Dogg] yet as the collaboration was done remotely, but we hopefully will someday soon.”

Right now, with the addition of Whitty on saxophone and extra help from keyboardist James Hill, the latest incarnation of the group is focused on an extensive tour in both the United States and Europe. However they’re planning on working on some new music soon.

“In between, we’re trying to record some things ourselves as well as with friends,” he says. “We’ll hopefully have a chunk of time to work on new music over the winter.”