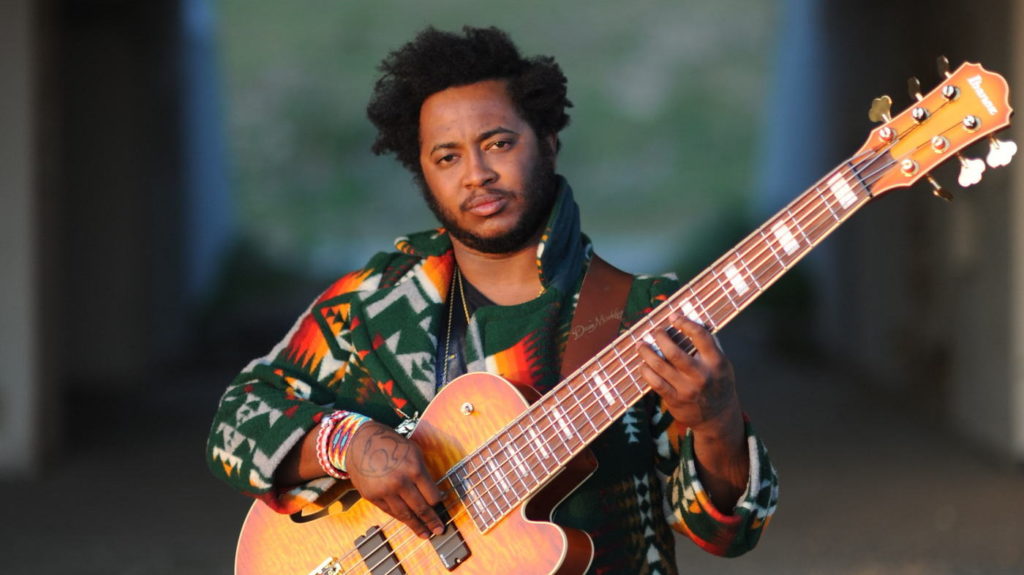 “As long as I don’t start murdering people are robbing banks in the name of Thundercat, I’m good,” Stephen Bruner says regarding his fixation with the ‘80s action figures and cartoon series. “I kind of had a creepier fascination with it when I was younger. It scared my parents a bit. My mom had to be careful and pay attention because if she didn’t, she would turn around and I would seriously be worshiping the toys. I’m sure eating the cat food, staring at the toys and not really playing with them would scare anybody though [laughs].”

It comes as no surprise Bruner adopted the Thundercat moniker as his musical alias in 2011. A music career was inevitable. Growing up in Los Angeles, he lived in a household that was always immersed in music. His father, Ronald Bruner, Sr., played drums with Diana Ross, Gladys Knight and the Temptations. His Grammy Award-winning older brother was a member of punk/metal group Suicidal Tendencies, but was also heavily involved in jazz. His mother was a flutist, his younger brother, a pianist, and even his grandma got down on the organ. In high school, Bruner joined his brother in Suicidal Tendencies, a move that launched him all over the world. Consequently, he brushed shoulders with the musical elite, but that was something he was already accustomed to as part of the Bruner family. He began touring with Erykah Badu, Snoop Dogg and producer Flying Lotus.

“I was definitely already a fan of people I’ve worked with. It did seem kind of natural not to trip out and realize this is a job to me that I wanted to spend my life doing,” he says. “So because of that, I wouldn’t allow myself to get too attached.

“Lotus and I think the same and a lot of respects,” he adds. “People always see us acting crazy and being goofy. We are experiencing different things together. We share the same mental space. That’s pretty funny to be honest with you and it’s like we can speak without speaking sometimes. It never gets old.”

The young prodigy commands a bass in a way that’s almost surreal, meaning he’s so good, it’s hard to believe he’s not an alien channeling music superpowers from outer space. It was only a matter of time before he stepped out from the background and spearheaded a proper solo career.

Bruner’s first album as Thundercat, 2011’s The Golden Age of the Apocalypse (Brainfeeder), was an unexpected melting pot of experimental jazz and everything in between; soul, funk, pop and electronic soundscapes found its way into the densely layered concoction, which brilliantly showcased Bruner’s penchant for songwriting and singing. The FlyLo-produced effort was well received and gave Bruner the fire to keep going down the solo path. Bruner followed up with The Apocalypse, which involved Badu. His working relationship with the Baduizm singer has evolved into a friendship over the years.

“I met her when I was 18 or 19. She was looking for music for New Amerykah: Part One,” he recalls. “She had been working with Madlib and J Dilla and they were playing her a bunch of tracks. I was sitting in another room playing X-box because that’s what I do. She heard this one song and was like, ‘who is playing bass on the song?’ And someone said, ‘oh that’s Thundercat’ and she walked in and introduced herself. I almost peed myself. I literally joined her band immediately.”

It’s clear Bruner’s sense of humor helps him to bridge the gap between the other musicians he works with. He’s adamant about Badu being “the funniest person” he’s ever met.

“She is the bees knees. She’s hilarious,” he says. “Dave Chappelle was like, ‘you would never expect how funny she is.’ He also said, ‘every musician wants to be a comedian and every comedian wants to be a musician.’ I think she is the epitome of that. She’s funny as hell. I don’t think we ever have a serious conversation. If someone died, it would be funny. When my friend died, she called and made fun of me [laughs]. That’s how we talk to each other. It doesn’t matter if someone caught A.I.D.S, that would be funny.”

Bruner’s relationship with FlyLo is similar in nature. They are more like best friends. It just so happens that all of his friends are immensely talented. He credits FlyLo for urging him to tackle his first album. While many people may think it’s a stretch to go from a band like Suicidal Tendencies to making, more or less, a jazz record, Bruner didn’t see it this way.

“Honestly, I guess it’s one of those things that was a natural progression to some degree. It didn’t feel too outlandish to me,” he says. “The funny thing is the one who suggested I do the album was Lotus. The second album is kind of a thing where I’m just in it right now, you know? I’m really excited. I try not to think about it too much because the music industry we are growing up with nowadays it’s completely different so I don’t know what to expect. I’m just happy I’m getting a chance to work, move forward and do things.”

Now, Bruner is focused on the new record and touring the world with his Thundercat catalog. His family could not be more proud. While Mrs. Bruner may have been terrified of her son’s obsession with Thundercat when he was a kid, she’s grown to embrace it.

Make sure you catch Thundercat in Northern Colorado’s own back yard 9/15 at the Mishawaka Amphitheater for a once in a lifetime night of music.