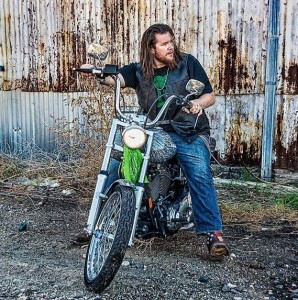 While we’ve reviewed our fair share of country albums here at BandWagon, Denver-based singer Bryan Thomas is the first artist we would compare 100 proof whiskey; while casual listeners probably won’t gravitate to it, but for someone looking for something “harder,” this is it. While there are hints of country, Burn It To The Ground, it is undeniably Southern Rock. Thomas doesn’t possess the typical twang/drawl of a country singer; his voice is more of a guttural growl filled with the kiss-my-ass attitude you would more associate with hard rock/metal singers.

Thomas tried his luck in Nashville a few years ago, saying he “tried to get famous and failed miserably.” When he returned to Colorado, he decided to go on tour with his band, in a roadie/extra singer capacity.

“We got a lot of buzz about us,” Thomas said, “so we started the full-blown project again, and it’s been lights out the last year. It took us one year to get a Nashville management company on board, and in 30 days of getting them signed, national radio and all the good stuff.”

Their breakout hit from the album is “Burn It To The Ground,” is a party anthem that sounds closest to what’s on mainstream country radio. Still, this is not a traditional, mainstream country album, at least in terms of sound and attitude. While the album is heavier than most, “Movin’ On” and “The Long Goodbye,” showing off Thomas’s more emotional side. These songs on another artist’s album would easily be ignorable, but given that they’re surrounded by Thomas’s more hard-edge work, they have more punch than they usually would. Again, this album possesses a kiss-my-ass attitude, so if you’re wanting a country music album with a kick, Bryan Thomas’s Burn It To The Ground is the album for you.

For more information, visit www.bryanthomasmusic.com. Furthermore, if you ever get the chance to see them live, do it.