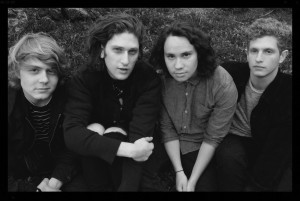 These days, there seems to be no shortage of new psych rock bands that are worth checking out, and today that band is The Baltic. Hailing from good ol’ Denver, Colorado, the band is comprised of drummer/singer Graham Epstein, guitarist/vocalist Adam Dankowski, guitarist Ari Kononov, and bassist Josh Kaplan who have been playing together since high school. They are a force to be reckoned with having just recently signed a record deal with Misra records and releasing their trippy, new EP: Archipelago.

Opening up the EP with a proper introduction is the appropriately named track, “Turquoise”.  With spacey guitars and vocals and a drum beat that will make a baby boomer reminisce about Woodstock, the track sounds like how it feels when those four tabs of acid you took earlier finally kick in as you descend down the rabbit hole and into the EP. Following the opening track is a driving pop tune entitled “Bloom”. This song is a little different as the band experiments with different textures like flutes and sweeping resonant filters on the drum fills. Instead of lush chords, most of the guitar work is based around counter melodies over a bass line that could drive a bus. The band lays it back right smack dab in the middle of the album with a sweet tune called “San Francisco” that features acoustic guitar and what sounds like a mellotron. This song is the strongest and most well written on the EP with potential to be a popular single.

What’s impressive about this band is their ability to use different textures to their advantage without going overboard. Fans of Tame Impala, the Strokes, and the like will enjoy. Overall Archipelago is a well put together EP and a strong label debut.