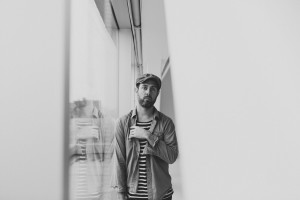 The album, four years in the making following the group’s eponymous 2012 release, was cultivated from years of Big Apple hustle and sacrifice. “New York is vibrant and amazing,” explains Johnston, “but it’s a bitch to survive financially and get anything creative done. You have to make it your life – prove to yourself and the community you belong.”

Setting his sights on performing music full-time, Johnston packed up his apartment last year and headed out on a European tour, eventually landing in Germany for a three-month stretch and crashing where he could. The peripatetic lifestyle would eventually inspire Johnston to dedicate himself full-time to writing, recording, and raising funds for the new record. The result is as wide-eyed and optimistic as you would hope from a songwriter pursuing a dream.

Time Is New wastes no time engaging ear drums, proffering the powerful “Least Resistance” from the outset. The tidy two-and-a-half-minute vignette of galloping drums, ascending choral melodies, and almost western portamento guitars evokes golden rolling hills and the whimsy of middle America. Even as the final refrain rings out, one can’t help but yearn for a frontier to explore.

The rest of the album follows the path blazed by its opener, layering clever effects-laden guitars, dense synth pads, and big sing-a-long choirs that frequently lift Time Is New into pure moments of rapture. The songs, though well-appointed through Alex Lipsen’s slick production, still maintain a sense of closeness and relatability. “It’s an attempt to bridge the gap between a rock show and my more intimate sets,” said Johnston.