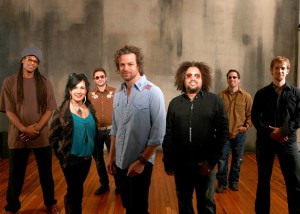 Comprised of founder/vocalist Michael Glabicki, bassist Patrick Norman, percussionist Liz Berlin, percussionist Preach Freedom, and guitarist Dirk Miller, the current incarnation of Rusted Root explore and execute almost every type of musical genre. This fact alone is what makes them so unique. African, Latin American, Native American, and other various forms of world music are injected into their material, which are sounds Glabicki sought out in the beginning stages of the band.

“I was very politically active in high school, Glabicki says. “I played little bit of music and ended up going to Nicaragua in ’87. Down there, a revolution had just happened. There was a lot of music, jazz and poetry on street corners. It got me excited there was this world that existed like that. It was just very creative. So when I got back, I wanted to create something like that. I went to college for one semester, dropped out, started Rusted Root, and started writing music. In Pittsburgh, we have the university here. They had a lot of cultural concerts going on and such. It was sort of all around. I had cousins who were in world beat bands and when I started writing music, I had my own vision of those sounds or the feelings of those sounds. So I pretty much locked myself up for awhile and started writing. I started auditioning musicians. I knew Liz from high school so I invited her down, she knew Patrick and slowly it came together.”

As Rusted Root began to pick up steam and secure a fan base, they could not have predicted the impact of their sophomore album, 1994’s When I Woke. The single “Send Me On My Way” was an insurmountable hit, although the group had a slight feeling they were on to something. They just didn’t realize their music would eventually have such a global impact. In fact, the “Send Me On My Way” has been used in several movies, including Matilda and Ice Age.

“At that point, our following was really coming quickly and easily,” he recalls. “We knew we had something really special. As far as getting on radio, it was secondary to what I felt about what we’re doing and the audiences that we were turning on.”

Those audiences would prove to be invaluable. Rusted Root’s live show is integral to their longevity. The shows take on their own identities and often end up feeling more like a spiritual experience. You’ll see people singing along to every word.

“The live shows are the heartbeat of what we do,” he explains. “Everything revolves around that. When I write a song, I’m writing a song I can play to the crowd. When we arrange the music, we take direction from the audience on where we should go with the song. Our business revolves around the live show. It’s everything to us. As far as the music goes, once they are written, they slowly get a life of their own. People singing along to them is part of that process of that song becoming something out of our control. It goes out into the world and becomes a ritual. When I heard “Send Me On My Way” on Matilda and Ice Age, it’s like the song grew up and has a life of its own.”

While on the Rusted Root path, Glabicki became more and more enthralled with the production process, which resulted in Red Cloud, his studio.

“I’m kind of moving out of the space I was in and I’m going to build a place out by where I’m living so it’s a little closer and more secluded,” he says. “I’m still producing and engineering records. I’m doing some stuff for different artists in town. I’m thinking about branching out and producing records. I surprised myself by how good the material came across. It was just really wild because I’m always producing Rusted Root, but producing somebody else is so much easier because you’re not running back into the booth, playing guitar and singing and running out. It was really, really easy. I want to do more of that and start doing some national acts to see where it goes from there. I’ve studied under some of the best producers and engineers in the world. I was always the student watching what they did and asking questions.”

At one point, Glabicki also considered a solo career and was even contemplating putting out his first solo record, but it never happened. Instead, Rusted Root is concentrating on its expansive catalog and touring around the festival circuit.

“I’m not sure what I’m going to do with the solo thing,” he admits. “I think it’s hard because I put so much time into the Rusted Root material and writing the Rusted Root stuff that it always feels like there’s not enough energy to do both. I’ve been trying to do the solo thing for a while, but the solo stuff ends up being Rusted Root material. I guess in a way I feel like, ‘Why do I need to the solo thing?’ Rusted Root was my first band I put together. I don’t feel like I have to create another identity. I spend so much time touring with Rusted Root, I want to be singing songs about things that are important to me every night and take very different directions with the bands, too because you don’t want to stay with the same sound you had 20 years ago. So the best way to do that is to write from the heart. It’s easy to think, ‘Oh this is my solo project,’ write songs and go, ‘Ok, maybe this is for Rusted Root.’ It’s a really easy way to clear my mind from the past.”
Rusted Root and Toad the Wet Sprocket with Guest Luke Wade, July 15, at Mishawaka, 13714 Poudre Canyon Rd., Bellvue, 8 p.m. Tickets start at $32.50. Visit www.themishawaka.com for more information.