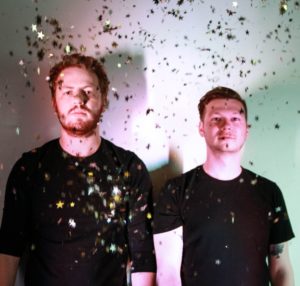 Earlier this year, electro-pop duo Lzrwlf, comprised of Sean Culliton and Xavier Provencher, announced that they would be changing their name to Retrofette. The 3 track EP I Don’t Mind EP is their first proper release under the new moniker and it marks a new beginning as they hone in on their danceable, new wave/synth-pop sound. Along with the name change, the band brought in Ben Weirich on synths and Dylan Johnson on drums to take their live shows to the next level.

The opening track “I Don’t Mind,” saturated with big synth pads and a funky lead line,  kicks off the EP the right way. Calling to mind other artists such as Chromeo or Friendly Fires, Retrofette takes synth pop head on while adding their own unique signature. The following track, “Skeletons,” lays down a groove that that is almost straight out the 80’s. With a broader range of percussive sounds on this track, from acoustic to electric, Retrofette is able to expand their tonal pallet in other ways than just through synthesis. Closing out the EP is the track entitled “Munich”. With the instrumental sounding almost like it’s straight out of an N64 cartridge in the best way possible, it provides an almost nostalgic element while pairing nicely with Cullion’s crooner-esque vocals.

Overall, the I Don’t Mind EP is a solid first release from the band with each track having the potential to stand alone as a single. Hopefully they’ll continue to expand on their sound and make their mark on the Denver music scene while creating a niche for more synth-pop artists. With something for everyone, Retrofette makes music that will make you want bust out the track suit, dust off the Delorean, and dance.