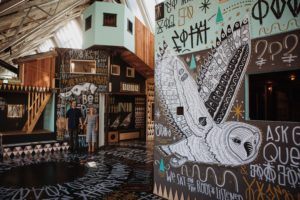 The best part of Greeley-based visual artist Wesley Sam-Bruce’s work is it’s clear he goes all the way with an idea. When he conceptualizes a piece, no matter how intense or bizarre the idea is, he makes it happen. Recently, the BandWagon got the chance to speak with Sam-Bruce about his work after his return from San Diego, California where he recently wrapped up a massive project with the New Children’s Museum. Listening to Sam-Bruce describe his projects, for the most part his ideas seem weird and far-fetched. He paints a very large picture for very large ideas and approaches his projects only limited by his own imagination. The grandioseness of it could easily be brushed off by sceptics… But then he delivers. Not only does he deliver, but he makes a living doing it.

“As an artist a lot of the time I’m trying to create this poetic version of some of the experiences I’ve gotten to take part in. It’s as if the real world and the art I’m trying to make is this mountain cruising through, and I’m just following along and picking up the pieces that fall off and I arrange them into piles,” says Sam-Bruce.

His most recent project working with the New Children’s Museum is epic in scale and execution. Titled the “Wonder Sound,” this multilevel installment is made up of thirty different rooms. From crawl spaces leading to hidden grottos, to a room filled with climbable spiderweb-like ropes, Sam-Bruce set out to create the sensation of exploring something ancient and foreign.

“We had this big gallery space, about 1,500 square feet. The idea was to create this big installation that was part tree house, part village and part undiscovered world,” says Sam-Bruce. Packed with content, Sam-Bruce uses poetry and images to tell the narrative of a creation story he developed throughout the installment, even going as far as to create his own language to communicate that story.

“Wonder Sound” is the result of two years of preparation. Sam-Bruce partnered with six different community centers around the San Diego area where he did similar installments that would lead up to the opening of “Wonder Sound”.

Originally from San Diego, Sam-Bruce moved to Greeley in 2013 during a hard life chapter so he and his wife could be closer to her family after she fell ill. Still dealing with some of these problems, Sam-Bruce says a lot of their journey through those hard times made it into this installation. “There is paradox everywhere in this installation, and a lot of that comes from our life being this paradox of joy and mourning. She and I get a lot of joy in life but it’s like this prism where on one side you have joy but at any given time you rotate that same experience there is pain and suffering, and that’s the case with any human being.”

Despite the hardships that life has thrown at Sam-Bruce and his wife, through it all they have managed to carve a piece of life for themselves that is beautiful. Not only this, but he has managed to cross the threshold to full-time artist that so many people have a hard time doing.

At 30, you’ll find Wesley Sam-Bruce an artist comfortable with himself and the work that he does. He is driven to tell the story taking place around him in a way that connects to the basic human nature in all of us, no matter how outrageous it sounds when he explains it.

Probably not going to San Diego anytime soon? You can find Wesley Sam-Bruce’s work all over Northern Colorado, including murals in Downtown Greeley down Art Alley and on 8th Ave, as well as art installations in John Galt Coffee and Zoe’s Cafe. Who knows, there might be a Poke Stop at one of them.