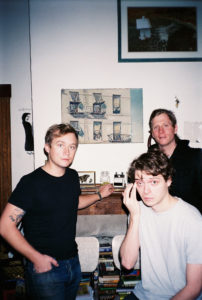 It’s strange to describe a record so aesthetically planted in nostalgia as anachronistic, but it’s oddly difficult to describe Omni’s debut record otherwise.

The trio, founded by former Deerhunter guitarist Frankie Broyles, shoots for the post-punk of 1978 and sticks the landing in a number of areas, but the songwriting and guitar arrangements featured on Deluxe can’t help but reflect the sensibilities of younger men interpreting the era through a modern lens.

Once you look past the unabashedly blown-out 70s tape deck recording and the handful of Marquee Moon or More Songs About Buildings and Food moments, you’re left with understated vocals and tangential guitar leads that are very much of the past decade – but that’s not a detriment.

The disconnect between the album’s surface and its musical subtext elicits a dissonance that draws the listener back to the play button for further inspection. More often than not, art is most interesting when it exists outside simplistic chronological boxes, and Omni’s Deluxe proudly situates itself neither in 2016 nor 1978.

“Wednesday Wedding,” an early highlight, fires along with eighth-note post-punk aplomb, but the guitar melody playing along is clearly influenced by numerous subsequent interpretations of the genre. It’s unsettling but also terribly fun to listen to.

Omni can also really play. The staccato riffs and grooves are lock-tight and economical, and songs never linger longer than warranted. The end result is a tidy ten-song 29:56 record, equally suited for aimless summer drives as it is manic basement post-punk dance parties.