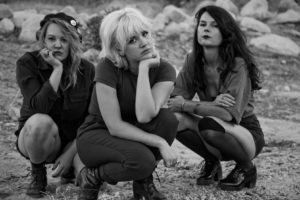 When sisters Jen and Jessie Clavin were little, the Los Angeles natives would play around with their father’s guitars, often daydreaming about starting a band one day. As they discovered groups like Siouxee and the Banshees, The Slits and the Velvet Underground, they realized it was actually a possibility. Right before graduating from high school, their dreams finally surfaced into reality.

In 2002, the Clavins co-founded a local punk outfit, Mika Miko, and quickly gained an underground cult following at infamous L.A. venues like The Smell.

“Our shows just started getting crazier and crazier,” Jen recalls. “I feel like we didn’t know what to expect from Mika Miko, but we realized there was a lot of room for the music we were making and being a part of the DIY world.”

After Mika Miko’s dissolution, Jen and Jessie formed Bleached in 2011. It provided them with the stability and creative control they’d always craved. Bassist Micayla Grace and drummer Nick Pillot eventually rounded out the line-up.

“With Mika Miko, if one puzzle piece was missing, the whole thing would fall apart,” Jen says. “With Bleached, we decided to have full control of the project so that doesn’t happen. It took a long time to trust Micayla as a full-time member. She’s been around for three years now, so we decided she’s an official member of Bleached. We met Nick at the beginning of the year, and I feel like Nick is the best drummer out of all them.”

The formula seems to be working. Bleached just released its sophomore album, Welcome the Worms, and it’s solid from start to finish. Mostly written in the Joshua Tree area, it finds the sisters in a place where they’ve finally honed in on their sound, perfecting their signature flavor of indie punk. Jen, who writes all of the lyrics, has been through a lot over the past couple of years, which is evident in every song, especially on “Desolate Town.”

After a crazy, drunken fight with a friend, Jen decided it was time to put the booze down. During that time, she wrote “Desolate Town,” which sounds eerily similar to an early Nirvana track.

“I recently had lunch with my friend who that song was about,” Jen explains. “I was drinking a lot and got in this insanely horrible fight with my friends. It was caused by this guy I was dating and I was kind of letting him emotionally abuse me. It was my fault ultimately because I was allowing it. I ended up losing it and ultimately losing my friends. I felt so alone in L.A. It felt like a desolate town.”

Jen stopped drinking at the end of last year, which she admitted had become “uncontrollable.” She often wouldn’t remember what happened the night before.

“It kind of sucks that you almost need that life or death situation to happen,” she says. “I had to stop.”

“Jen has been amazing,” Jessie adds. “I would support having an alcohol free backstage zone if she needed it. I think for awhile we were doing that, but people would slip. We have to remember it’s important for Jen. To see how far she’s come is incredible. We have to respect the reason we are in this band and that’s thanks to Jen working so hard.”

For Jen, it was a blessing in disguise, but she still struggles sometimes. Being in a band often requires playing in bars, where naturally there’s lots of alcohol around.

“It’s hard because I’m the only one that doesn’t drink,” she says. “Seeing everyone else drink is really rough.”

Thankfully with her sister’s support, it’s getting easier. Bleached is preparing to perform at both the Denver and Chicago Riot Fests, which feature legendary bands like the Misfits, Jane’s Addiction and Ween. Jen and Jessie look forward to getting on stage every night, but for different reasons.

“For me, it’s that 45 minutes of performing where you can really let yourself go and it’s a high you only get from performing,” Jen says. “Before, when I was drinking, I would try to get really fucked up because my nerves were so bad and I felt like I wouldn’t be entertaining if I wasn’t drunk. Now I think I perform better now that I’m sober.

“I also like to revisit the songs live because I get excited to play them again,” she continues. “I’m also singing lyrics from when I was getting really fucked up and I feel like I can revisit that moment but only for a couple minutes, then I realize I’m on a way better path now.”

“I feel like I recently just started admitting this,” Jessie says. “I’ve always wanted to be a performer. I love being on stage and love the attention, but only the attention about something I created. I love to show people this is the music we write and this is me. I’ve wanted it since I was a kid. I have to take full advantage of it. It’s exactly what I’m supposed to be doing right now.”