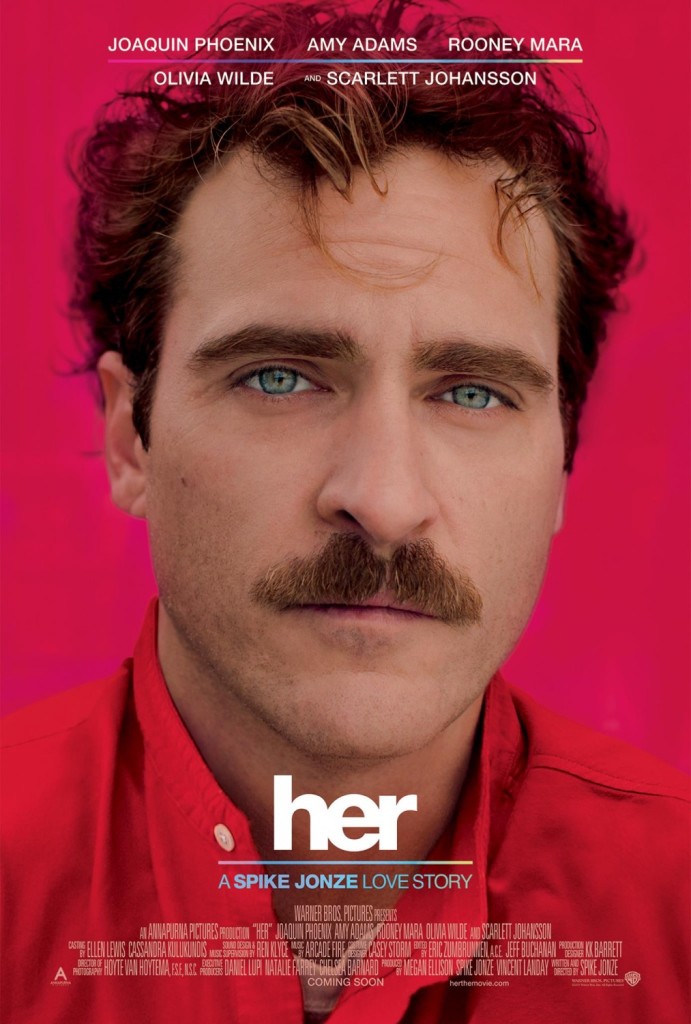 Few things hurt quite as deeply as losing a loved one. While losing someone to a deadly disease, it might be more painful when someone you’ve loved decides that they are no longer willing or able to reciprocate that love. When that happens, it’s impossible to ignore the gap in your soul previously occupied by the light of that loved one. Spike Jonze’s, Her is about filling that gap and much more.

Part of why, Her is this year’s most powerful film is the way in which it portrays interactions between different personalities for an intensely human vibe. There are a lot of those interactions: Theodore Twombly (Joaquin Phoenix), of course, has his interactions with Samantha (Scarlett Johansson), as well as those with his wife Catherine. The latter is strained and unpleasant. Theodore also talks with his friend Amy (Amy Adams), who herself has a strained social relationship with her artistically-inept husband Charles. Theodore and Amy dated once in college, but according to the former, it didn’t work out. However, there’s a magnetism between the pair that suggests that their connection may eventually go beyond friendship, even if the character (and the movie) don’t explore it. Theodore, emotionally repressed as he is, ironically works for a company that writes love letters for its clients, and spends his days writing deeply emotional letters for people who never have the right words. The irony is lost on the protagonist, but not on the audience.

On another level, Her explores the tendency of current and future generations to depend on–and interact with– technology. At any given moment, save for a serene moment on the beach, every character is connected in some way to their technology, most commonly when walking around town with their earbuds in and phones in hand. In the near-future world of Her, you can simply ask a disembodied voice to check your email, or speak a simple command to be connected to a chat room filled with horny singles. It’s an extension of our modern world, and it’s both troubling and amusing. The concept of dating an Operating System isn’t even viewed as taboo by the vast majority of characters in the film, which plays to the film’s strength. The concept is silly, but this is a relationship that is utterly raw and real to the ones involved. 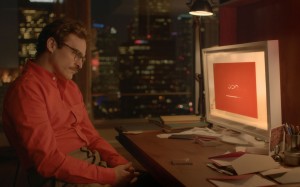 And about the moving on part? Yes, Her  tackles that challenging piece of your past with aplomb. Films rarely explore personal growth beyond just finding the next person to fulfill that archetype of the perfect mate, but Her is as much about finding the perfect relationship as it is recovering from the ones you’ve been in. This will resonate powerfully with victims of heartbreak, destructive romances, or any sort of poisonous relationship.And for those that just can’t let go, a pivotal scene in Her not only reveals the cathartic endgame of such a situation, but grants the tools to follow suit and finally separate them from the pain of loss.

Most striking about Her is the range of possible ways in which the film may resonate with viewers. For me, the film was about overcoming loss; but beyond that, Her also explores the ways in which seemingly-impossible romances can break down barriers, that all of us have our own painful scars, and that all of them can be healed. Her, short-changes no one, the way its message travels the gamut of people making the hurt and empathy its most powerful asset. Joaquin Phoenix’s incredible performance and Spike Jonze’s decision to frame his primary player in intensely intimate long takes are chiefly responsible for deeply emotional moments.

This is not only the best film of 2013, but perhaps the greatest unconventional romance since Punch Drunk Love or Lars and the Real Girl. These are films that frame romance from a different angle; while the copy-paste modern romances feature a flawed woman meeting the perfect man, these films are those that feature a flawed man finding love in a flawed woman. These are raw, real emotions that shed the fairy tale romance in favor of something that feels far more intimate.  Her isn’t just a great film, it’s an essential one.