Late at night, three males in their 20s were sprinting around downtown Greeley, phones in hand, stopping periodically at certain areas to tap on their phone  screens. If you were to ask these three males what they were doing, you’d probably be told dismissively that they were “hacking portals.” Don’t worry, there’s no cyber-espionage here. It’s just Google’s newest augmented reality massively multiplayer game, Ingress.

Admittedly, the background of Ingress is a bit silly. The “story” revolves around a substance emanating from portals and two factions vying for control of the access points. The Enlighted and The Resistance are constantly battling to control the portals, with the winner having the bragging rights of owning large sectors of a city.

The genius of Ingress is its integration with Google Maps and, by extension, the real world. Any given landmark around your town or the world can be a portal. Downtown Greeley itself is packed with them—the gazebos, statues, and odd architectural bits are almost all portals in the game, all ripe for contention between the Enlightened and Resistance. The twist is that you cannot simply sit in your room and command portals; you have to be within 40 feet of the portal to take it, meaning that you have to get off your ass and walk around town. Tantalizingly, owning multiple portals in an area (and hacking into friendly portals) will net you Portal Keys, which will allow you to link portals across an area and cast a net of ownership across that area and make it significantly more difficult to take back.

Opening up the Ingress app will pull up a map of your current area. Portals will show up if you’re near them; for example, the mural next to D.P. Dough or the gazebo in Glenmere Park are portals. Get near the portal and tap it on your screen to start hacking. If you own the portal, you’ll be replenished with items. A possible item you might get is a Resonator. 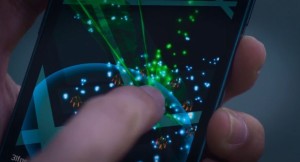 Resonators are essentially the line of defense for your portal. Enemies that want to command your portal will first have to destroy the resonators that surround it. To defend your portal, you’ll need to lay down resonators. Part of what gives Ingress its legs is the ability of higher-level players to strengthen and reinforce lower-level resonators. If you’re a high-level player and come across an allied portal with level 1 resonators, you can use some of your own more powerful resonators to replace the weaker ones and therefore make that portal stronger. One portal I encountered in downtown Greeley was surrounded by a number of level 1 resonators, and one viciously tenacious level 8 (the current maximum) resonator. A high-level player had swooped in to teasingly drop one powerful line of defense, making the portal impenetrable to lower level-players such as myself.

Resonators are attacked via Xmp Bursters. I don’t know what that stands for, but having a boatload of them is a very good thing. You deploy Xmp bursters to wear down the enemy’s resonators, and once the resonators are destroyed, the portal is ripe for the taking. There are other items as well, such as shields and amps, which further broaden the offensive and defensive tools at your disposal.

Ingress is good fun. It’s a great way to not only get out and get active, but ally with other players and get with some new groups. The game is unmistakably at its best when you’re sharing it with a group of friends, running around an area late at night to command portals, or sneaking back out the next morning to reclaim a portal from a friend that’s allied with the opposing forces.  As crushingly nerdy as the game sounds, there’s actually a pretty solid foundation here and the way it’s combined social interaction with real-world GPS integration is damn clever. Ingress is a free download, so what are you waiting for?

A down side to the game? Greeley resident Maurice Woods who has been playing the game states, “I’ve never met a girl while playing Ingress.”