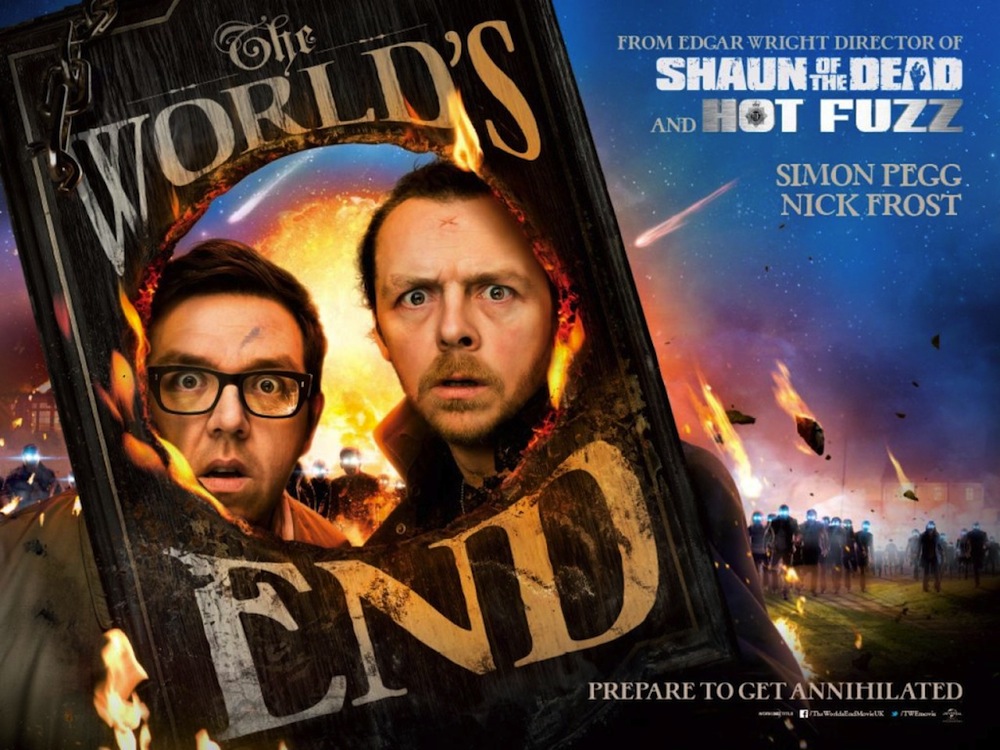 There is nothing inherently wrong with nostalgia, but if you’re not careful, you into one of those guys who listens to Springsteen’s “Glory Days” and utters the words, “High school was the best time of my life.” In Edgar Wright’s new sci-fi-comedy The World’s End, that guy is Gary King, (Simon Pegg) a 40-something man who still dresses and acts as he did when he was a teenager in the quiet English village of Newton Haven.

King cajoles his old school friends into returning to their hometown to attempt to complete an epic pub crawl they tried in their youth. King’s friends, however, aren’t that interested in reliving that night. His best mate Andy Knight (Pegg and Wright’s frequent collaborator Nick Frost) is still pissed at him over an unfortunate incident between them. Two of his other friends, rocker-turn-architect Steven Prince (Hot Fuzz’s Paddy Considine) and real estate agent Oliver “O-Man” Chamberlain (Martin Freeman, BBC’s Sherlock) have respectable jobs and obligations. Peter Page, (Eddie Marsan, Guy Ritchie’s Sherlock Holmes) the gang’s reserved, quiet wimp, is just as hesitant as the others, though that has to do with his still domineering father/boss and his wife.

Nonetheless, they head to Newton Haven. They realize that much has changed in their town, and that Gary hasn’t changed at all.

Then they get attacked in the bathroom by robots. WTF?!

Wright, Pegg, and Frost have been known for their genre-bending homages to pop cultures since their television series Spaced hit British airwaves in 1999, moving into movies with the 2004 romantic Zombie comedy Shaun of the Dead and their ode to American action movies with 2007’s Hot Fuzz. The trio’s new outing goes in a slightly different direction.

The World’s End takes its cues from classic sci-fi films such as Invasion of the Body Snatchers and They Live, and drape the aura of those films over a movie that is ostensibly about a guy who refuses to move on from the past. Hot Fuzz and Shaun wear their love of their respective genres on their sleeves, while World’s End simply spends its time battling robots and unwrapping just how fucked up Gary is and how his past actions have affected his friends. Much like how Shaun was both a romantic comedy AND a Zombie movie instead of an outright spoof of the zombie genre, World’s End is both a respectable science fiction film and an excellent comedy in the vein of Judd Apatow’s best work. It just so happens to also be a surprisingly mature film about clinging to your imagined past.

Per usual, Wright’s visuals dominate the film. He’s definitely one of the best action directors around; one bar brawl featuring Pegg’s King trying to down a drink while fending off multiple robots was one of the better action scenes I’ve seen all year. Sharing screenwriting credit with Pegg, their attention to detail yet again creates a film that you will watch repeatedly on DVD yet still find little bits and pieces that add to the story every time.

Pegg and Frost swap their usual roles here, highlighting their acting chops. Pegg’s King is an unrepentant, narcissistic jackass who tries everyone’s patience, while Frost’s Andy acts as his bluff, always calling him on his bullshit, usually ignoring the fact that fucking robots have taken over Newton Haven. In the final act, when Gary and Andy do make it to the final pub, The World’s End, their veils come down and the rift in their friendship seems to become somewhat healed. It’s the most emotional, heartfelt scene I’ve seen in any of Wright’s films, and Pegg and Frost fucking sell it.

Overall, The World’s End is excellent. It’s a cautionary tale about the dangers of nostalgia and conformity, and a badass sci-fi action movie that’ll make you guffaw. See it in theaters if you can. 10/10