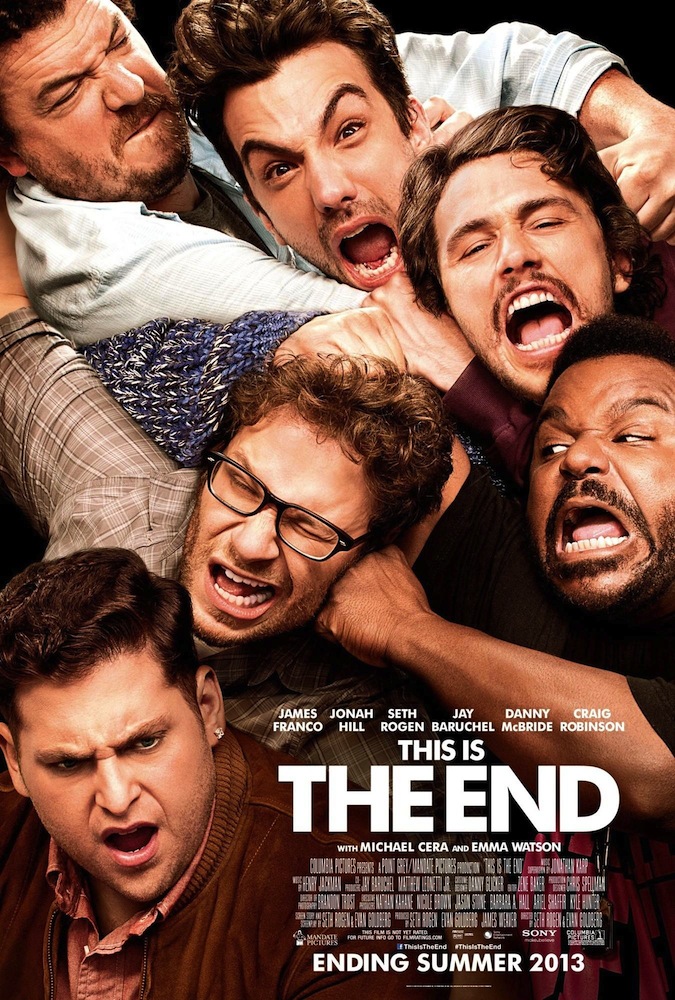 I was doomed from the beginning. The day “This is the End” came to theaters, I was told this film is, and I dislike even thinking about this, better than Pineapple Express, and yes, even Superbad. More than people giving away surprise endings, I despise it when people raise my hopes to a level that cannot possibly be reached.

This movie is funny. It was damn funny. Seth Rogen is at the top of his meta-fictional game with this flick. It’s about Rogen and his buddies, James Franco, Jonah Hill, Craig Robinson, Danny McBride, and Jay Baruchel as themselves, in an end-of-the-world scenario. First indication it was the end of the world: a coked-up Michael Cera slaps Rihanna right on the ass.

I apologize, I feel like I’m doing exactly what pissed me off about my expectations for this movie. As a huge fan of improv comedy, a style Rogen is known for in most of his modern comedy classics, this movie brilliantly utilizes the art of making shit up on the spot. And this is perfect fodder for this type of humor: smug-as-fuck actors having to deal with the shallow relationship issues they have with each other in the midst of the world coming to an over-the-top end.

If you go into the theater expecting another stupid, overly blue comedy without any substance beyond satirized stoner impressions and pussy actor bitches… you won’t be disappointed. There’s plenty of that shit, but also a surprising amount of morality and commentary on the shallow behavior of Hollywood actors and their lifestyles.

It kind of bothered me that the kings of shit, semen and piss comedy were lecturing me on being a good person. On the other hand, it was kind of nice to see these shitheads try and face themselves in a humorous light they have yet to try and portray on screen.

They all come across as genuine as they can while also putting on a show that Rogen/Franco fans have come to expect. Really, the root of the problem comes down to expectations.

There are a lot of cameos in this movie, but Emma Watson gets the best appearance award. She’s so cute when she’s in survival mode.

This movie pushes boundaries, even for those guys and it was a lot of fun to experience, but don’t expect Superbad, because that was a once in a lifetime powerhouse comedy phenomenon. This film is like the little brother that never quite makes their parents as proud so he goes off to be a journalist and put down other people’s art to feel better about himself.

I do highly recommend this film. Oh and there’s demon rape, so that’s fun. Leave your parents at home, save yourself the awkward silence on the drive home. You can’t unsee this.