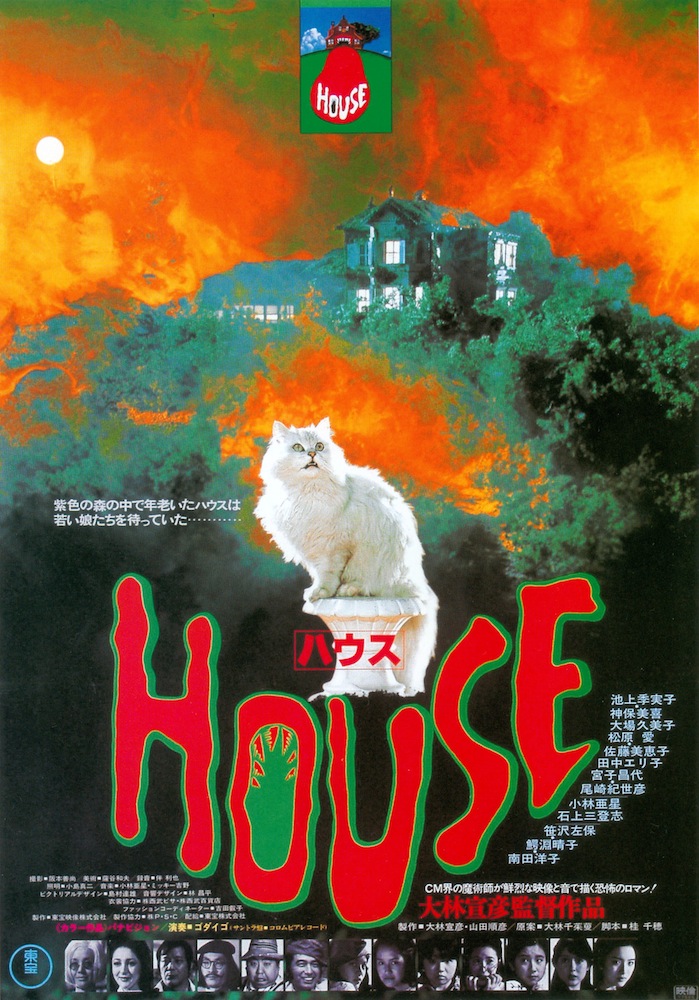 However, Japan doesn’t make it easy to dispel myths about its culture when they churn out stuff like House, a 1977 horror film directed by Nobuhiko Obayashi inspired by conversations he had with his daughter. Criterion Collection released the movie on DVD and Blu-Ray in 2010. Criterion has released more controversial films, but nothing in their catalogue could possibly be as absurd as this film. There are shows on Adult Swim that make more sense than House.

The film centers around Gorgeous, (Kimiko Ikegami) a make-up obsessed schoolgirl. Her father has returned from Italy with her new stepmother, Ryoko, (Haruko Wanibuchi) who seems to attract gusts of wind that make her scarves billow in an oh-so-beautiful-but-oh-so-other-worldly way. Upset, Gorgeous writes a letter to her Aunt (Yoko Minamida) that she hasn’t seen for years, asking if she and her friends could come visit her.

For starters, Mac disappears while retrieving an watermelon she bought from the Aunt’s well. Fantasy goes off to search for her, pulling the watermelon out, or so she thinks. (Spoiler: It’s Mac’s disembodied head, which then begins floating in the air and bites Fantasy on the ass, which of course no one believes. What The Fuck?!) Kung Fu fights off a bunch of possessed logs she’s splitting, losing her skirt in the attack, dismissing it as an illusion and spends the rest of the film in her tank top and underwear. The grand piano bites Melody’s finger. Then everything goes south.

The origin of the film is rather peculiar and makes sense, given the context. Jaws had come out two years earlier, and the bosses at Toho Studios thought that if a then-amateur like Spielberg could do that well, they could do the same. They hired Obayashi, a commercial director at the time, to develop a similar horror film. Obayashi decided to consult his daughter, leading to a film that is inspired by the nonsensical fears a child would have.

The end result is a horror movie that was seemingly made by a guy who mostly attempted to make his own version of Evil Dead aimed at teenage Japanese girls while simultaneously dropping acid every day while making it. House is not bad; but I can’t say that I’ve seen anything as odd as this film. There are Troma films that have more logical storytelling than this. It is undeniably Japanese. It still would be, even if Obayashi reshot the film in English with American actors.

I would most definitely recommend everyone see House at least once, just so they know what absurdism is. Horror fanatics might be a little put-off though. It has a lot of “that’s weird” moments when it should have “that’s frightening” moments. The ending is a little disturbing, but the disturbing factor keeps getting offset by the oddness of the film in general. Still, it’s an okay movie. 7/10