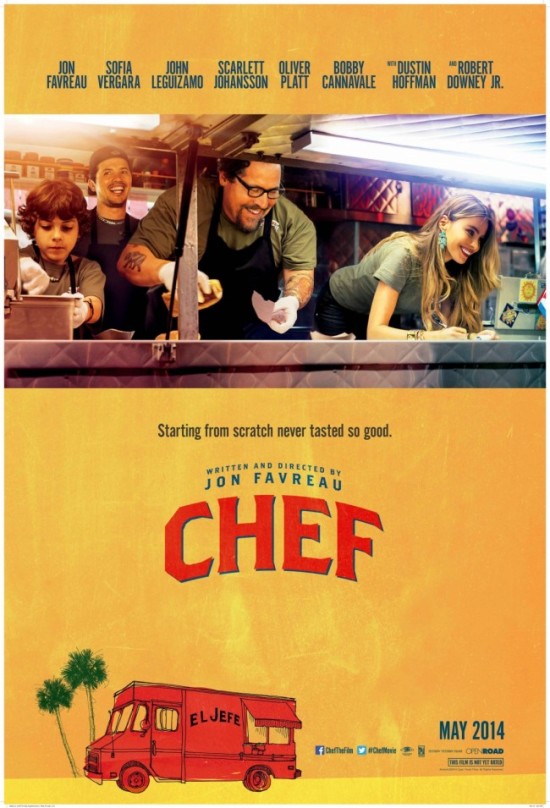 Jon Favreau has had an encompassing career in the film industry. Starting out as an extra on film sets, he hit it off with Vince Vaughn early on, writing his starring role in the film Swingers and eventually directing the charming Christmas film Elf.

Later on, Favreau helped jumpstart Marvel’s franchise success with Iron Man. Now he is seen as a blockbuster director who can do damn near anything, even if that’s not the case. (Cowboys and Aliens was a flop that didn’t exactly set critic’s hearts aflutter.) Keeping Favreau’s recent history in mind while watching the film Chef, you’ll recognize it as an autobiographical film.

Favreau wrote, directed and stars in the film as Chef Carl Casper. Miami-born and working in Los Angeles, Carl finds himself held back by the boss (Dustin Hoffman) at his restaurant when he’s prepping for a visit by food blogger Ramsey Michel (Oliver Platt). The boss orders Carl to make his classic dishes, and the classic dishes don’t exactly impress Michel. Michel’s bad review and a Twitter spat leads Carl to explode in public and quit the restaurant.

While in Miami, Carl’s ex-wife Inez (Sofia Vergara) suggests that Carl get a food truck, something which Carl has heard before and always shot down, but he eventually cottons to the idea and finds that making street food – Cubano sandwiches, in particular – is helping him reconnect with his love of cooking, as well as help reconnect with his son Percy (Emjay Anthony) and Inez.

Chef is to Favreau what the Cubano sandwiches are to Carl. Chef is Favreau going back to his roots as an independent director, probably to figure out why he does what he does. That is me getting meta about the movie, but it’s not why the movie works. The core of the film revolves around Carl’s relationship with his son, and that’s what gives the movie some emotional punch. The food truck saga helps Carl get back in touch with his son, who at the beginning of the film is dragged along by Carl as he preps for the visiting food critic. Driving from Miami back to Los Angeles, Carl teaches Percy his trade and bonds with him in a way that clearly wasn’t there in the beginning of the film.

Chef is also a family movie, despite it’s R-Rating. The only reason Chef has an R is because of language, but that does give the movie a level of realism that I can’t say I’ve really seen before outside of mumblecore films. It’s a sweet, earnest film where people curse. There’s a particularly rude joke about hush puppies in the film that got a huge laugh in the theater. 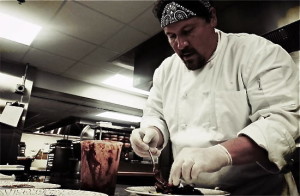 Alongside Hoffman and Platt, Favreau has also brought on his Iron Man stars, Robert Downey Jr. and Scarlett Johansson, to give some additional star power to the film. Johansson is Molly, the cute server at the restaurant Carl works at in the beginning, while Downey is Marvin, Inez’s eccentric ex-husband who offers Carl a food truck. John Leguizamo is the second-in-command of the film as Martin, Carl’s sous chef ditches the restaurant gig when Carl tells him about the food truck. Leguizamo brings the funny throughout the film, and brings some of the heart as Carl’s supportive, can-do friend. Everyone is on top of the ball in Chef. Platt was interesting to watch, too; I seem to recall that this guy almost exclusively plays assholes, but here he’s fairly sympathetic.

Another thing that stood out about Chef is its portrayal of social media; Twitter plays a big part in the film thanks to Percy, who helps promote the food truck just by sending out tweets. It’s actually fairly accurate; much better than some other portrayals of social media as seen on TV.

Overall, Chef is an excellent film, and a great return to Favreau’s roots. But again, don’t watch it on an empty stomach.