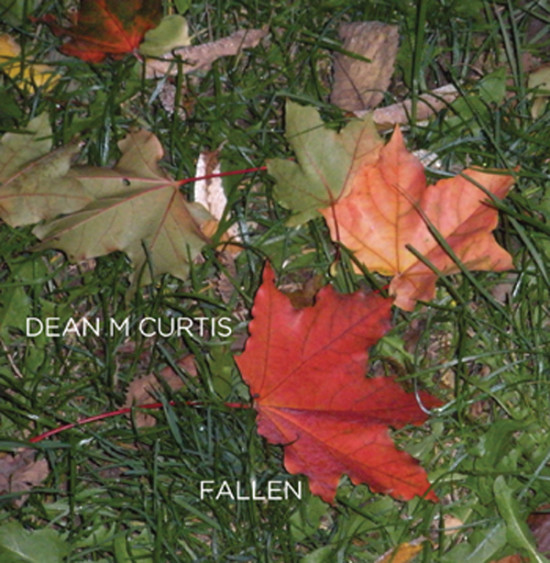 Dean Curtis, a Fort Collins-based musician and singer, seemingly threw everything into Fallen, his 2014 album. I suspect if he could use a kitchen sink as an instrument, he would’ve done so. It’s an impressive solo debut album for Curtis, who’s the bassist for the reggae band DubSkin and has been producing music for the past ten years.

Curtis not only does the vocals and bass on all the tracks, but he plays both acoustic and electric guitars, drums, lap steel, keyboards, omnichord and melodica. When was the last time you heard melodica on an album? And what the hell’s an omnichord? Either way, Curtis shows he’s got chops with all the work he’s put into Fallen.

Listening to the album, I found myself going back to the word “melancholic;” it kept popping up in my notes as I listened through the thirteen tracks of Curtis’s debut. Take the first track for instance, “Wasted All My Time.” It’s a poppy, lighthearted rock track that’s very cheery but sort of melancholic given the subject matter. Then there’s “Washes Away,” another upbeat and lighthearted song that’s subtly poignant.

And then there are two instrumental tracks, “Drift” and “Reagan’s Plan,” both of which run around eight minutes and while there are not lyrics, they both possess an underlying sadness to them. The former wouldn’t be out of place in a 1960s Japanese Yakuza film, while the former brings to mind the work of Greeley artist Joe Lee Parker’s Sound Art Live performances. “Drift,” however seems more upbeat and mellow than outright melancholic.

Fallen doesn’t really have a set genre, which makes it a bit of a challenge to judge correctly.  Curtis shows off his love and knowledge of jazz, blues, rock, alt-rock, and electronic music, and it leads to a bit of dissonance between the tracks at times. What follows “Wasted All My Time” is “Dark Blues,” an eight-minute long jazz/blues instrumental, followed by what sounds like a White Stripes-inspired rock piece titled “Fuck Outta Here.” There are eight instrumental tracks on this album, and not one of them sound alike.

Personally, I like this album; it’s a bizarre mix of different genres and is really quite enjoyable to listen to. Occasionally though, it throws you off, such as with “Algid.” Another instrumental, mostly electronic-sounding, yet very eerie and haunting song to listen to. It puts you on edge. You’re just waiting for a scare chord to come about, like the musical equivalent of a noise in the dark that makes the dumb teenager in a slasher film say, “Who’s there?” But that scare chord never comes.

“Algid” is kind of by itself on the album; as I said earlier, no track sounds alike. “Luminous,” another long instrumental, stands out for striking a balance between being uplifting and melancholic where you can’t tell what it is exactly. “Black Horse” is a short instrumental with an added salsa vibe; it sounds sexy. “Night Dub” is a moody electronic piece highlighted by guitars in the background. The last track on Fallen, titled “Stargazing,” is a mellow rock instrumental that’s spacey and just sounds cool.

While the album is loaded with instrumentals, the few proper songs in the piece shouldn’t be overlooked. “Love Ain’t No Friend” is a slow, relaxed alt-rock/semi-jazz/blues piece that I particularly like. In general, you don’t really hear a lot of blues and jazz stuff today, and what you do get to hear usually isn’t that great. Curtis, however, really knows how to pull off jazz and blues music. If he were to perform at the Greeley Blues Jam one year, I would totally buy tickets just to see him.

Probably the best song on the album is “Bury My Heart,” a homey acoustic guitar piece. This is a song that would close out the end of a road movie as the main characters drive away into the sunset.

For a solo debut album, Fallen has shown that Curtis can really do whatever the hell he wants. Whichever direction this guy is going, who knows, but all I know is he can do his own thing and he’ll probably make bank doing so. Godspeed, Mr. Curtis. 8/10