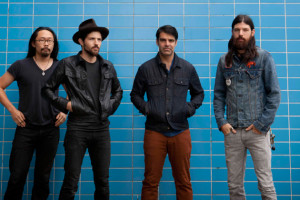 While it may seem unfathomable that New York City native and hip-hop aficionado Rick Rubin produced The Avett Brothers’ records, it’s really not that strange. Rubin has produced all types of music during the span of his career, including Americana. From Johnny Cash and The Beastie Boys to Mick Jagger and Public Enemy, Rubin has left his fingerprint on countless albums, and in the process, cemented his reputation as a legendary producer.

Rubin is one of those enigmatic people who is essentially unreachable for the majority of the population. He’s on a dream list of interviews for a slew of journalists, and very little is known about who he really is as a person. But for many artists, he’s like a god among men. The Avett Brothers look at Rubin no differently. Comprised of brothers Seth and Scott Avett, the musical version of the duo came to fruition in the late ‘90s in their hometown of Concord, North Carolina. Little did they know, their path would lead them to the founder of Def Jam Recordings.

“I guess I was in 6th grade when I got License to Ill so I remember that it was a big deal. I remember just staring at the record cover,” Scott Avett recalls. “From then on, it was Red Hot Chili Peppers and all The Beastie Boys stuff. Everything he did with Johnny Cash were milestones and huge influences on us throughout our lives, too. The different styles that he did venture out into while he was doing it, we were experiencing it and being inspired by it. The first time we met Rick, his work had kind of fed us along the way, and here we are today. In a lot of ways it was just this mutual interest, which was very cool.”

For both Avett brothers, working with him was an interesting process in itself. He produced their 2008 album, I and Love and You, 2012’s The Carpenter and 2013’s Magpie and Dandelion. They had just as much curiosity about how he operated as the rest of us.

“When we started working with him, I asked, ‘How do you go from working with Johnny Cash to Mars Volta to The Beastie Boys? How do you handle each different act?’ He said, ‘you know 15 years ago, no matter who it was, I would have probably gone into a room and said this is what I think you should you do, this is what I think you should try and that’s that,’” Avett explains. “’Now, I learned every single act is so different and I cannot go and handle it with that approach. He says he tries to see where we are, identify what we are and let it just be the best thing we can be. I feel like a lot of the changes we were entering and doing on our own, Rick was facilitating them, exaggerating them and trying to magnify them. He’s really been, in a lot of ways, this hyper facilitator for us.”

As Scott Avett went on to describe what it’s like working with Rubin, there’s a sense that he knows the elusive producer truly is untouchable. The way he speaks of him, it’s almost like he’s describing Prince or the late Michael Jackson.

“There are just so many people that want to interview him. He’s kind of like Bob Dylan or Willie Nelson,” he says. “After a while, you realize you say the same things over and over and over [laughs]. The trick is having something that means something to that person to talk to them about, and they actually want to. That’s what it’s about. But those guys have people tugging at them all the time. They can’t meet everyone. They’re all the friendliest guys in the world. You have to be thankful for people that are at least honest that they don’t have time to talk.”

Despite Rubin’s mysterious nature, The Avett Brothers are much more tangible. His Southern disposition is at the core of Scott Avett, and it comes out clearly during the course of the interview. He laughs easily and seems genuine about what he has to say. The Avett Brothers’ popularity has soared over the past few years and they’ve had a lot of recent success. The Carpenter was nominated for a Grammy Award for Best Americana album, they’ve made numerous television appearances on shows such as The Late Show with David Lettermen and Austin City Limits, and they’ve been featured in almost every notable music magazine in the world. Nonetheless, Scott Avett never forgets his origins or how hard he’s had to work to get to where he is today. The accolades and attention the brothers are getting is something they’ve been anticipating for a long time.

“We started playing on the street. Seth and I started playing on street corners or wherever anyone would have us,” he explains. “We were playing very, very small places—sometimes for nobody. I certainly remember a few shows where nobody showed up. We played for bar and we practiced and kept going. All the while, we were screaming and begging for people to pay attention. In so many ways we were screaming, ‘listen, we are making something we want you to consider looking at or listening to, and if it’s good enough, it will take. We know that. If not, that’s ok. We just want a chance.’ Really, that’s what we did for a long time and it turns out it was good enough. Each step of the way it got better.

“All that works together,” he continues. “You know, lots of people talk about luck with the entertainment business or notoriety and whatnot, but I think before luck, there has to be amazing skill and a lot of discipline. And then all you have to do is get in there. We’ve been doing this since we were 20-years-old. We’re going on 12 years so it didn’t just happen overnight. We’ve been gearing up since day 1. So the attention doesn’t really bother us.”

The Avett Brothers released The Carpenter in 2012. According to a press release, “The Carpenter is the first album to be released under the partnership between Rick Rubin’s legendary American Recordings and Republic Records. The unanimously lauded band’s latest album debuted at #4 on the Billboard Top 200, giving them their highest debut yet. Their latest offering, last year’s Magpie and Dandelion, received mostly mixed reviews. American Songwriter writes, “Magpie is chock full of tracks that show the Avett Brothers are (very wisely) growing their sound, while remaining true to their core principles and what listeners like about them to begin with,” while Q Magazine says, ”Not quite as organic as they seem, their perfection lacks taste despite its polish.” No matter what the critics say, it’s something The Avett Brothers happily stand behind. For Scott Avett, it all stems from something he simply loves to do, which is creating music and art. However, he understands it’s also a job that comes with a price. It’s not easy to be on the road all the time, there are hundreds of press obligations and some critics aren’t exactly encouraging.

“It helps you learn,” he says. “It helps you identify things about yourself. Talking about art is part of it. The performing and marketing is fuel for the fire you have to do. The core of it is making songs, making art and creating something you can be proud of.”