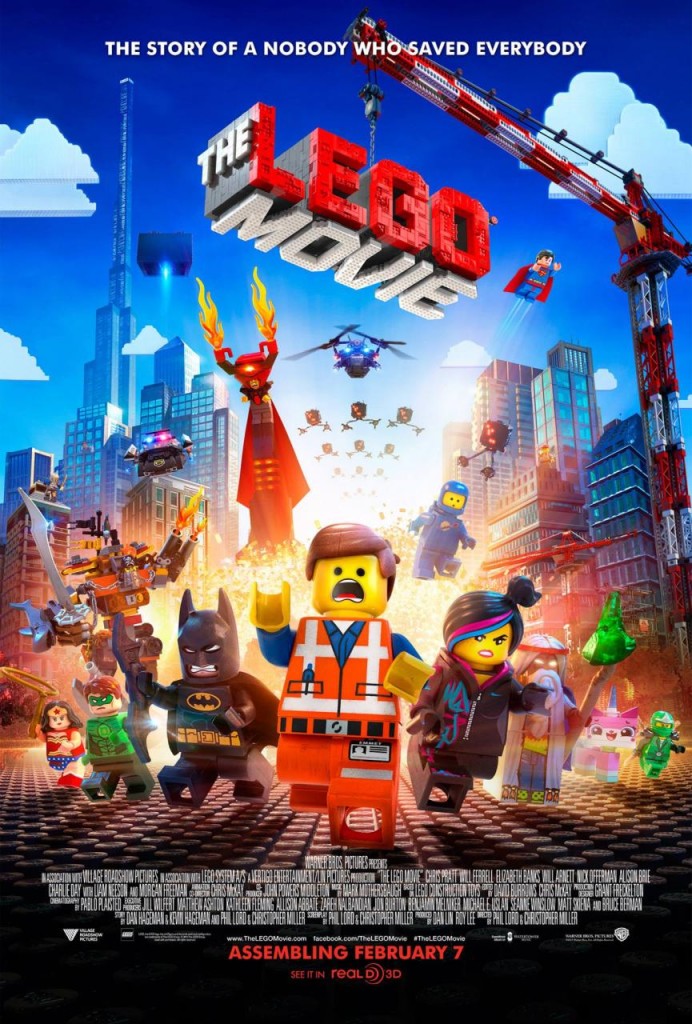 The Monomyth. You have seen it in action if you’ve ever watched a Star Wars movie, seen an episode of Community, or read through The Hobbit. Commonly known as The Hero’s Journey, it’s a structure that many myths and stories follow, often unintentionally. Summed up by mythologist, lecturer and writer Joseph Campbell in his book The Hero with a Thousand Faces, storytellers such as George Lucas and Dan Harmon have used it to put together their creations, and Hollywood has used it as a guide to screenwriting.

In a way, the Monomyth is the movie making equivalent to Lego instructions.

So it’s only appropriate that The Lego Movie, yet another film based on a toy, would follow the Monomyth structure like Transformers and G.I. Joe: Rise of Cobra. Here’s the difference between The Lego Movie and those two franchises: The Lego Movie is actually good, and it does nothing but mock the Monomyth.

Phil Lord and Chris Miller, the same directing duo behind two other unlikely critical successes, Cloudy with a Chance of Meatballs and 21 Jump Street, co-wrote and directed The Lego Movie, spending quite a bit of time tearing down the current Blockbuster formula through it’s hero Emmet, (voiced by Parks and Rec star Chris Pratt) a dopey, generic construction worker Minifig who accidentally discovers the Piece of Resistance.

The Piece of Resistance was to be found by someone called “The Special,” a mythical hero prophesied to stop the superweapon called The Kragle. (Which is actually Krazy Glue.) The Kragle fell into the hands of anal-retentive Lord Business (Will Ferrell) who plans to use it to end creativity as we know it. Upon finding the Piece of Resistance, Emmet is thrown into an adventure to stop Lord Business’ evil plans, because as far as his compatriots are concerned, he is The Special.

The mockery of the Monomyth revolves around how Emmet, prophesied as “The Special” by Vitruvius, is the least qualified person to lead the Master Builders into a battle against Lord Business because he cannot build stuff on the fly like Wyldstyle – who builds a motorcycle out of objects in an alley to escape with Emmet. Even though Emmet doesn’t get far in his creativity (His one original idea — a double decker couch — is pretty lame.) Vitruvius and Wyldstyle encourage him further and further because they still believe he is The Special, simply because he found the cap to The Kragle. It’s a ridiculous idea that you could foist that kind of expectation on someone who’s not prepared in anyway to handle it.

Yet Emmet does succeed. Just not in the way you would expect.

Overall, The Lego Movie is actually a good examination of the faults of the modern blockbuster, but it’s also a celebration of creativity. It gets to that childlike joy of building a world, much like using a Lego set to make your creations without instructions.

Part of what sells that is the animation. It’s a CG movie, yet it looks like a stop-motion animated Brickfilm one could find on YouTube. Everything is made from Legos in the film, including the explosions, gunfire, and water. The level of close-up detail on the Lego pieces are fantastic; you can see the flashing from the “molded” pieces and the imperfections of the plastic on the characters and bricks. Most of the time you find yourself wondering if it actually was stop-motion.

The voice acting of the film was great too. Shout out to Morgan Freeman as Vitruvius; his character was a riot. Vitruvius is very much a parody of the type of character Freeman usually plays, filled with a self-awareness and spunk that Freeman never shows. Pratt’s Emmet is pretty funny, but also brings quite a lot of sincerity to the film; his final confrontation with Ferrell’s Lord Business is rather touching. (Ferrell in general is awesome, but for reasons I won’t go into.) Banks’ Wyldstyle, a love interest for Emmet, is pretty badass and acts as a good foil for Emmet.

And then there’s Arnett’s Batman. Batman acts as a rival to Emmet throughout the film, acting almost like a posing teenager. After Freeman, Arnett’s character was a highlight. Brie and Day’s characters, Uni-Kitty and Benny, bring the funny in the most chaotic way possible. (“SPACESHIP!”) Offerman’s Metal Bread, seemingly a one-note joke, is also the second most badass character in the film after Liam Neeson’s character, Lord Business’s henchman Bad Cop. Neeson’s character is quite possibly the funniest villain ever to grace the screen.

I won’t lie, I thought the idea of The Lego Movie would be horrible. However, I can say without a doubt, it’s probably going to be one of the best movies of 2014. Catch it while you can. 9/10.