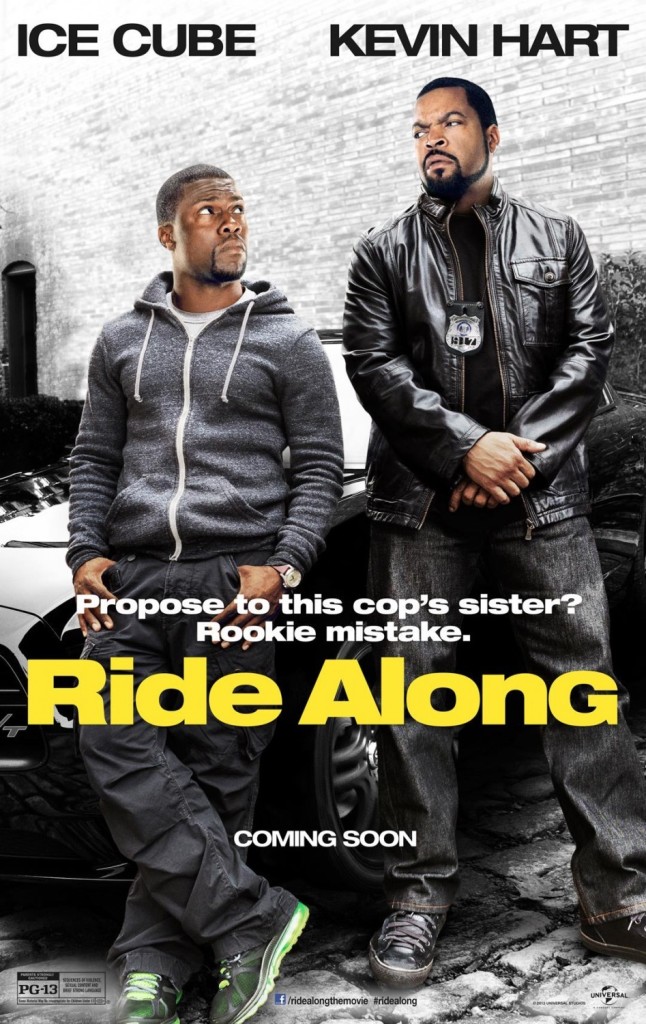 The plot of Ride Along is yet another of the cut-and-paste, generic buddy movie templates : aspiring police officer, Ben (Kevin Hart), at the behest of his girlfriend, Angela, must get the blessing of her hard-boiled cop brother, James (Ice Cube) before asking for her hand in marriage. James, who harbors an intense hatred towards the clownish Ben, brings Ben on a ride along for a day, so that the fast-talking security guard can show his worth. It’s aggressively derivative and not at all fun.

To be fair, Ride Along isn’t completely terrible. But it’s still very bad, and there are precious few laughs to be had here as it explores many of the most generic boundaries of taste while staying within the boundaries of the PG-13 rating. Ben confronts a group of bikers and mistakes a woman for a man, then calls her a “thing”—hilarious! Later, Ben argues with a young kid in a scene which ends with the kid accusing him of being a child molester—how fun! It’s never quite completely offensive, but it certainly isn’t amusing.

It’s almost painfully obvious when Kevin Hart is improvising a line, mainly because the rest of the script is stuck in cruise control with incredibly forgettable & pedestrian dialogue, and a plot that lazes from one scenario to the next. It’s all deeply predictable, and follows almost every trope of the cop and buddy movie, literally. With one caveat, every cliché is there. There’s the loose cannon cop, a dirty cop, an angry lieutenant, a shadowy villain–the whole list. Ben’s girlfriend, Angela does what buddy cop movie girlfriends do best: wait around an unnaturally expensive-looking loft in her underwear and wait to get kidnapped by the bad guys in Act III. Worst of all, there are occasions in which the movie looks like it might try to do something different, before stepping back and reverting back into easy and simplistic territory.

Hart, to his credit, lights up the film with his energy. The comedian has never personally appealed to me in terms of his stand-up, but he’s always possessed a manic charm that at the very least makes Ride Along a bit more than a boring slog. On the other hand, Ice Cube plays the straight man so straight it’s frustratingly dull. The two have decent chemistry at times, but Hart might as well be yelling at a brick wall for the same effect. The idea is clearly some sort of Odd Couple-esque shtick, but the joke is too one-sided to work here.

Director Tim Story caught attention with his solid comedy Barbershop. Since that initial success, he’s consistently failed to replicate the quality, with films ranging from Taxi to the dire Fantastic Four. Here, he once again constructs a film that is not only lifeless and generic-looking, but confusingly shot and edited at worst. A multitude of filmmaking rules and standards are broken here, and the action scenes, apart from the opening car chase, are poorly put together and establish no sense of where the players and objects are situated in a scene. With the camera angle constantly changing and cutting to a different position, there is no semblance of where things are in relation to everything else.

With bad filmmaking and even worse writing, Ride Along starts the year off poorly with a lifeless, boring action comedy that barely rides on the fumes of its star’s energy. Its greatest crime is just how forgettable it is—it’s difficult to recall almost any specific punch line in the sea of generic cop dialogue and limp storytelling. Though as bad as it is, there are bound to be worse this year, and it’s unlikely Ride Along will be remembered on any 2014 “Worst of” lists. Whether that’s a good or bad thing is anyone’s guess, but regardless, it’s best to just let this one run out of gas on its own.