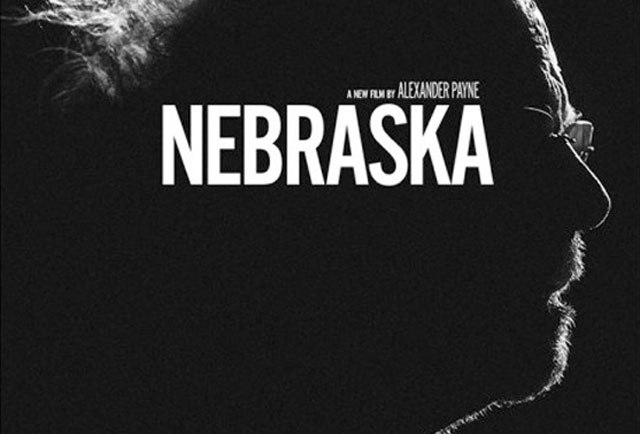 It sucks getting old.

It probably sucks just as much when you’re watching someone you love grow old. It can be frustrating. It can be angering. There are days where you just feel like curling up into a ball and sobbing, and then conversely, days when you sit back and chuckle. This is what Alexander Payne’s Nebraska is about.

The film revolves around elder Woody Grant (Western veteran Bruce Dern) and his son, David (Former Saturday Night Live star Will Forte). Starting in Billings, Montana, a police officer brings in Woody after finding him walking alongside the highway. Why was Woody walking on the highway? He was on his way to Nebraska to collect his million dollars.

David inspects the slip of paper alerting Woody of his “winnings:” it’s a marketing scam to get people to sign up for magazines. Nevertheless, David’s father keeps attempting to leave Billings. Eventually, David packs up his car and drives his father to Nebraska against the wishes of his salty mother, Kate (June Squibb) and more level-headed brother, Ross. (Breaking Bad’s Bob Odenkirk) All four of The Grants eventually arrives in Woody’s hometown of Hawthorne, Nebraska to spend some time with relatives and friends, and things get more screwed-up and dark.

Nebraska possesses some of the dark wit that Payne is known for, but this is more of a straight-up drama with funny moments sprinkled throughout. Payne in a lot of ways reminds me of a low-key, mellow Wes Anderson, or a Wes Anderson that doesn’t traffic in quirk by the truckload and never frames up actors dead center in the shot. Both are good directors who do comedy and drama in a similar fashion, but Payne in general is much more reserved and realistic than Anderson. Here with Nebraska though, Payne pulls back even further in terms of style and story.

It works though. Given the subject matter of Nebraska – I mean, let’s be honest, this is about a guy with early stages of Dementia or Alzheimer’s, even if they don’t outright say so – there really is no way you could make this funnier. It’s a rather dark movie about a son dealing with his troubled father – who’s really quite a prick – and all the shit that gets stirred up within their family when the rest of their relatives find out one of their own is a “millionaire.” The black-and-white photography of the film just adds to the underlying fruitlessness of David and Woody’s quixotic quest. 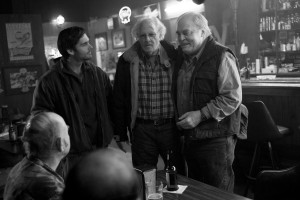 It’s not miserable, though. When the film decides to be funny, it’s funny as hell. June Squibb owns quite a few of those moments as Woody’s beleaguered wife, a woman who overshares with David about how everyone in Hawthorne wanted to get in her pants. Dern also owns quite a few funny bits, such as a search for his dentures by the railroad tracks where David finds them, and Woody doesn’t recognize them at first.

Forte and Odenkirk, on the other hand, are in drama mode here. With Odenkirk, who’s spent the last couple years working on Breaking Bad, this isn’t all that surprising. Forte, though, is a bit of a shocker. Who would’ve thought fuckin’ MacGruber could act like a normal person who you relate to? Forte is excellent as David, relatively put-upon by Woody and only really doing this trip to Nebraska to escape his own issues in Billings, but still is the only truly good character in this film.  I really dug him in this; it’s awesome to see Will Forte do low-key acting.

Going back to Dern’s Woody, despite his more prickish tendencies, he is also surprisingly sympathetic. While his lucidity is often in question and his other actions (implied or otherwise) don’t help his case, you can’t help but feel a little sorry for the guy and root for him a little throughout his struggle to get his million dollars. Dern was great.

I must confess, this film did hit a little close to home. Without going into detail, my own family has been dealing with issues going on with my grandmother the last couple years, and while she is not scatterbrained like Woody, the general struggles made it somewhat difficult to watch Nebraska. It’s more accurate than you would think. But because of that, I cannot do anything but recommend Nebraska. This is a great film about what its like growing older, and what that is like for those around the elderly who do their best to make their remaining time worthwhile.