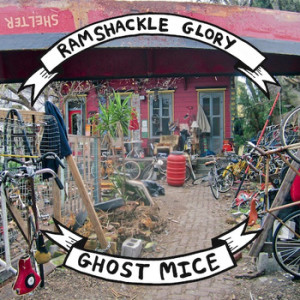 Funded by a Kickstarter campaign, Ramshackle Glory and Ghost Mice’s split album Shelter was first described by Ghost Mice lead singer Chris Clavin as being “about the ideas of shelter and home. Ideas like sleeping on floors and living in punk houses and not having anywhere to live at all.” These two anarchist folk-punk bands came together to produce a ten-track LP that resonates with the ethos of their past releases and, of course, sounds fantastic.
The theme of the album is easily summed up in the first chorus of Ramshackle Glory’s song “Any Place (Growing Up):” “Hell, sometimes home is any place that’s dry.” This is an album split by two bands who have spent plenty of time homeless or on the road (often simultaneously), so the lyrics seem genuine. Each song deals with the nature of home, whether it’s living in cars (“House on Wheels” by Ghost Mice) or on the road (“Punk is the Worst Form of Music, Except for All the Others” by Ramshackle Glory).
Ramshackle Glory’s songs deal with these ideas experientially, based on lead singer Pat the Bunny’s history with homelessness and drug addiction during his teen years. “Eulogy for an Adolescence Shattered Against Elliot Street Pavement (Here’s to Being Young!)” deals with that side specifically, with lines about stealing beer and buying whipped cream with food stamps just to huff it, with the helpless junkie refrain of “Here’s to being young / I hope I die before I get old / Hell, I just hope I die before the spoon gets cold.”
The first half of Shelter, the five songs by Ramshackle Glory, has a sound unlike what most would consider ‘punk.’ Self-described as “punk rock with all the wrong instruments,” the inclusion of accordion, trumpet, and piano in addition to more traditional rock sounds, like electric guitar and drums, gives this band a distinctive sound. At times jaunty and at times sounding like the musical equivalent of a car crash (appropriately).
Ghost Mice are also a folk-punk band with a sound few would describe as “punk,” but they are punks in every other aspect. This two-piece consists of a guitarist and a violinist, with the occasional overdubbed mandolin or ukulele, and two imperfect voices that harmonize beautifully.
The songs on their half of Shelter touch on the idea of home in a more concrete way. For example, “House of Chaos (333 S. Henderson)” is about life in a punk house, paying the rent by shoplifting and trying to live as a cohesive, cooperative anarchistic unit. Then there’s “House on Fire,” that touches more on the ideas of property and capitalism: “I am caged, I am chained / We’re all slaves to the things we own.”
Ramshackle Glory and Ghost Mice are both seasoned bands with solidly defined sounds, and the lyrical content of Shelter is well within both of their wheelhouses. Stream the album or buy a physical copy at RamshackleGlory.BandCamp.com.