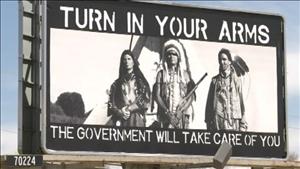 Greeley got national media attention on the week of April 29th when a group of anonymous residents purchased two billboards, posting a picture of three men in classic Native American clothing with guns, with accompanying text: “Turn in your arms. The government will take care of you.” The chosen imagery and implied message have created a national controversy, both because of the gun rights implications and the accusations of insensitive comparison to Native American genocide.
A comment on the Denver Post’s article says, “I am a Navajo Indian and I am not offended by the billboard. The billboard merely points out broken promises by the U.S. government.” Though account executive Matt Wells, with Lamar Advertising in Denver who sold the billboard space to the anonymous residents, suggested it wasn’t about the Native American plight at all, but about gun rights, saying, “I think it’s a bit extreme, of course, but I think people are really worried about their gun rights…” Another Native American internet poster said about a similar argument made in an online forum three months ago, “If you are trying to compare the genocide of Native Americans to Americans being forced to have stricter gun laws, you should just go walk in front of a bus and remove yourself from the gene pool.”
Talking with CNN, executive director of Rocky Mountain Gun Owners, Dudley Brown, supported the billboards’ message, asking, “Where can we send a check to support more?” Irene Vernon, a Colorado State University professor and chairwoman in the ethnic studies department Vernon told the Associated Press that the plight of Native Americans history with the U.S. is far more complex than Native Americans being forced to turn in their arms.
In this most recent media storm, the most cited reference of forced Native American disarmament is The Wounded Knee Massacre, which took place on December 29, 1890. The US 7th Cavalry Regiment, commanded by major Samuel Whitside, detained a traveling group of Miniconjou Lakota and after forcing them to set up camp, attempted to disarm them. There were approximately 500 troopers versus the 350 Native Americans, 230 of whom were women and children. The camp was surrounded by troops and four rapid fire M1875 mountain guns. A struggle reportedly broke out, with a soldier trying to take a gun from a deaf Native American, Black Coyote, who did not understand the order. In the scuffle, his gun was discharged and around five young Lakota men revealed weapons that were hidden under their clothing and opened fire on the troops. The Lakota women, children and unarmed men (including the ill chief, Spotted Elk) who fled were hunted down and killed.
At least 150 Lakota men, women and children were killed, with 51 wounded (some dying from injuries, putting the approximate death toll to upwards of 300). 25 troopers were killed, with 39 wounded, many from what was thought to have been friendly fire from the mountain guns and the confused close range shootout.
So are we talking about Native Americans’ sensitivities or gun control laws? The community seems to be just as split on the offensive nature of the billboard as it is on the issue of gun control itself, and the combination of these two topics seems to muddle both points even further.