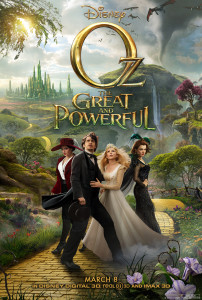 Sam Raimi’s Oz the Great and Powerful goes back in time to tell the story leading up to the 1939 classic The Wizard of Oz. James Franco stars as Oscar Diggs, who begins as an amateur magician, going by the stage name Oz, trying to make a living at a traveling circus in Kansas. Oz is a classic trickster with questionable morals that sometimes get him into trouble. While trying to escape from a very angry Strongest Man Alive in a hot air balloon, he gets sucked into one of the biggest tornadoes Kansas has ever seen.

After landing in a river in the Land of Oz, the magician meets an attractive witch, Theodora, played by Mila Kunis. She tells him of the prophecy stating a great wizard with the name of her land was to fall from the sky and save her kingdom. As an egocentric man, Oz claims himself as a great and powerful wizard, hoping to get cozy with Theodora and escape his rough life in Kansas. Theodora leads him to the castle to introduce him to her sister, Evanora the witch, played by Rachel Weisz.

Evanora, the seemingly good witch, sends Oz away to fulfill the prophecy by killing Glinda, who she blames for killing the king. With a throne and a room full of gold as a reward, Oz decides he is up for the challenge. Oz is left wandering the Land of Oz, trying to figure out who the real bad witches are and how he can save the city, or try to escape.

Though doubtful of his magic powers at first, by the end of the movie everyone in the Land of Oz believes in the powers Oz possesses. Michelle Williams plays a remarkably sweet Glinda the Good Witch as she helps Oz to realize his greatness.

Special effects and green screen technology were able to make the world of Oz like a child’s dreamland. Art director Robert Stromberg, who worked on the sets of Avatar and Alice in Wonderland, was able to create a glistening Emerald City. When first entering Oz, Franco was surrounded by flowers twice his size that stuck out of the movie screen. It seemed that everything on the screen was surreal–so clean and fresh-looking. It held up to the classic The Wizard of Oz even though it was made by a different company.

The movie included important bits and pieces taken from The Wizard of Oz, such as the poppy field of slumber, flying monkeys, and scarecrows, which made it authentic. This was a tricky process for Disney, as the original Oz movie is owned by MGM. The film was not allowed to include ruby red slippers, like the ones worn by Dorothy (Judy Garland) in the 1939 film. Disney also had to ensure the green of the witch’s face was a significantly different shade of green than that of the 1939 film. Disney was not allowed to put a stereotypical mole on the witches chin or use the swirl design for the yellow brick road. Even though some items had changed, the characters were just as enjoyable as those in the original film.

Likely taking after his role as Harry Osborn from Spider-Man, Franco was able to create a brilliantly masculine man with an ego the size of the Emerald City–except this time, he is the hero. Kunis and Weisz play a believable sister team while Williams’ confidence in her character lights up the screen. Not only can you expect a remarkable prequel to The Wizard of Oz, but also a great stand-alone movie. 8/10