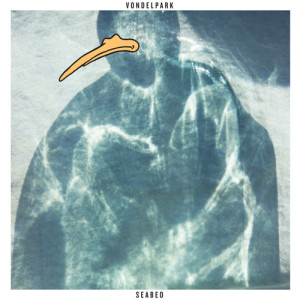 Composed of childhood friends Lewis Rainsbury (vocals, production, bass, guitar, keys,) Alex Bailey (bass,) and Matt Law (keys,) Vondelpark has been making music together for eight years. In the last few years they have been a band preparing for larger audiences outside of their standard European gigs. Their newest endeavor and full-length LP, Seabed, dropped April 1st on R & S Records and moves just like its clever title implies. Vondelpark floats through the ten-track album like they are walking on the bottom of the ocean floor.

The songs are spacious and atmospheric, utilizing the guitar and bass to compliment their use of heavy synthesizers and samples. Rainsbury’s surprisingly soulful voice tops off the defining tracks, fully embracing the space created by the band. Their drum loops are jazzy and hypnotizing, anchoring the band in a dub sound absent in the American idea of the genre. The live instrumentation seems almost symbiotic to the samples, and the transitions between the two aspects of the band are seamless.

The two singles from the album, “Dracula” and “California Analog Dream,” are perfect examples of what to expect from the album and what the band themselves are capable of. “Dracula” is listless and pulsating, full of echoing vocal samples. Rainsbury’s vocals themselves are scaled back, leaving almost too much space for the sleepy melody, but it still works for the aesthetic of the album. “California Analog Dream” on the other hand is groovy and embracing. The subtle bass and guitar licks coupled with Rainsbury’s hauntingly honest voice give the song a gloss perfect for college radio.

The only thing the album really lacks is more of Rainsbury’s voice throughout the record. The vocal effects are stellar but sometimes they muddy and drown out the words in a manner that somewhat takes away from the album. These are simple cosmetic problems, though, for an otherwise impressive release. The strengths of this album will give the band firm legs to stand on for when—not if—the band goes on their North American tour.

Vondelpark’s sound finds a home with those tired of what dub has come to mean in the United States. Dubstep as we know it fills arenas and amphitheaters for the summer music festival circuit and has become ingrained into popular culture. Now, as the pioneering acts of dubstep are attempting to step away from the aggressive signature sound, their legacy still remains with club DJs and frat parties across the board.

Across the pond tucked away in the London bass scene is a style of dub that harkens back to its stripped down, slower-tempoed roots. James Blake brought this sound to American audiences hungry for less sound and more song in their dubstep. Vondelpark, in a sense, is continuing what Blake started just a few short years ago. While Seabed lacks a certain accessibility that Blake’s breakout self-titled album has (i.e. no Feist covers) it does have a sound American audiences might be ready for.