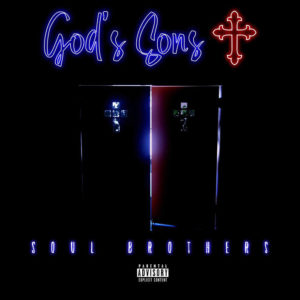 A free, six-track EP called God’s Sons was released by Greeley hip-hop act Soul Brothers early in July, 2018. Self-described as a family and a brotherhood, the trio has a bond that seems to run deeper than blood. A notch above their previous releases as solo artists and as a group, God’s Sons EP solidifies the Soul Brothers as a force to be reckoned with and demonstrates a solid mix between old school and new school sounds; blending influences from legends like Eminem and Nas, to the newer-style flows exhibited from acts like Hopsin and the recently deceased Mac Miller. Soul Brothers have crafted their sound into what is a truly enjoyable EP and as a group, they are committed to their cause to change the world through their work.

Written by the Soul Brothers, Mario Samuel Diaz, Ethan Esparza-Escobar, and Thomas Easter, the majority of God’s Sons was produced by Easter aka Grimm Tha Kid, who also takes home the mixing and mastering credit. The EP showcases Soul Brothers’ own love for the music as well as telling their story and the story of their families. They smoothly depict the highs and lows of their lives as artists in God’s Sons as well as tales of various obstacles they have had to endure and overcome.

The three emcees certainly show off their talent while furthering their immersion into the culture of Hip-Hop, both on God’s Sons and live in concert, so pay close attention. With inspiring performances that promote crowd participation, their lyrics are relevant and relatable to anyone with even a mild appreciation for rap and hip-hop. Each rapper brings to the table a different flow and presence, making God’s Sons a successfully diverse release with frequent changes in style and flow. It’s a must-listen, enticing fans of old-schoolers and new-schoolers to look forward to new and upcoming releases from this fresh NoCo act.

Overall, God’s Sons is a versatile and notable EP from this young group of emcees. Each song depicts different but rich content, displaying each artist’s individuality, all the while paying earnest tribute to the hip-hop lifestyle. Soul Brothers’ mix of hard-hitting lyrics and smooth wordplay make for a versatile album proving that the art of wordsmith over a funky beat will never die.