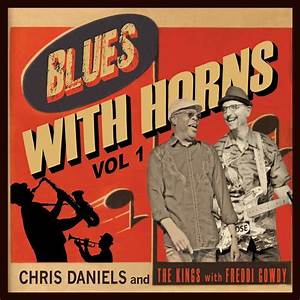 He was inducted in the Colorado Music Hall of Fame in 2013. He’s an Assistant Professor at the University of Colorado’s Denver campus. He beat back Leukemia after being diagnosed in 2010. He’s been featured in commercials for Ford and McDonalds, made music for television, and acted as a record producer. (He helped put together Andy Sidow’s Reasons for Departure, which we reviewed recently.) And since 1984, he’s been fronting the blues outfit Chris Daniels and The Kings, putting out album number 15 in September of last year. That album, now featuring Freddi-Henchi frontman Freddi Gowdy, is Blues with Horns Vol. 1.

With their fifteenth album, Daniels was inspired to showcase horn-section-heavy blues for a new generation. At a blues festival, Daniels encountered a young blues fan who thought blues was nothing but 12-bars, guitar and harmonica, “not sax, trumpet or horns.” Setting out to showcase New Orleans/Memphis-style, horn-heavy blues, Blues with Horns Vol. 1 is mostly a showcase of blues covers such as “Soothe Me Baby,” “Fried Food/Hard Liquor,” and “Baby’s in Love with the Radio.” Bookended by a pair of originals by Daniels, “Sweet Memphis” and “Rain Check,” this is actually a great album for those who, like the young fan Daniels encountered years ago, were unaware of horn-infused blues. (Though any Blues Brothers fan will be more than familiar with this style of blues.)

“Sweet Memphis,” Daniels’ opener, is the introductory paragraph of this musical essay, crooning of blues intertwined history with Memphis, and is a great song. Stylistically, it meshes well with the rest of the album’s cover songs. CDATK are covering different artists like Sam & Dave, Elvin Bishop and Johnny Watson, but it’s still pure in its execution, so to speak; a person who knew nothing about the artists The Kings’ are covering would easily think they created these songs from whole cloth. “Soothe Me Baby” sounds far funkier that the original Sam & Dave tune, but that in no way detracts from it; it’s still a great song.

With Blues with Horns Vol. 1, Chris Daniels and The Kings have created an excellent album for both blues newbies and old timers steeped in the history of the blues. Any and all blues lovers out there need to track this one down.