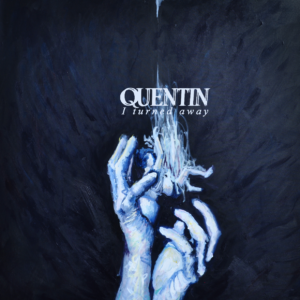 I Turned Away, is a Quentin finding themselves in their own noise. What set them apart early on in the northern Colorado music scene was their jazzy approach to modern rock music. A band molded out of the music performance program of the University of Northern Colorado, Quentin formed when guitarist Jack McManaman and drummer Adam Gilsdorf wanted to branch out from the traditional jazz and classical music they were learning in college.

“I think for me I was inundated by what my teachers were telling me in school and what my peers considered good music that I forgot what I actually loved,” says Gilsdorf. “The bands that stuck with me for the last ten years were not the ones I was learning about in school.” Finding vocalist Arianna Snow and guitarist Brian Galaviz along the way and adding Adam’s brother Noah on bass, the band took shape.

Now fully embracing their shoe gaze sides, I Turned Away is dark, dreamy, and still peppered with some of the tricks they learned as students at one of the leading jazz schools in the nation. Recorded at Mighty Fine Productions in Denver with Collin Bricker, the tracks are as clean and polished as anything we’ve seen from the studio, and the emphasis placed on McManaman’s layered guitar shines. “(Bricker) was pretty hands off which I enjoyed. It wasn’t that he didn’t assist us but it was more fun and scary to try figure a lot on our own,” says McManaman.

Having the immaculate production is just what this band has needed. Tonally, McManaman and Gilsdorf know exactly what they’re looking for as songwriters and musicians. Recording at Mighty Fine gave them the breath they needed to express themselves artistically. Admittedly a little nervous going into the studio, they quickly got over themselves and the confidence is palpable throughout the record.

If I Turned Away was a movie, McManaman’s guitar would be the main character. So much of each song is driven and highlighted by the dreamy and washed out guitar layers which creates the landscape of band. While McManaman’s guitar would be the main character, its vocalist Arianna Snow who steals the show. With an ethereal, Kate Bush-like quality, her voice sits in a strange pocket between McManaman’s guitar and Gilsdorf’s inspired drumming. At first listen, those not ready might find this off-putting, but after a couple of listens it starts to make sense. “Our goal with this record was to make something that we wanted to listen to. Something that spoke to us and we could share,” says McManaman.

The downside to this record shows itself in a few places and has so much to do with its strengths as its weaknesses. That dreamy shoegaze sound they’ve found for themselves can begin to drag during a top to bottom listen of the album, and some of those jazzy licks picked up at UNC can at times feel disjointed and jarring to the untrained ear.

For Quentin, I Turned Away is a big step in a new direction. Drawing influences from across the musical board from Steely Dan to Mastodon, McManaman and Gilsdorf wrote a record that gives people a look at a darker and more vulnerable side of themselves. Each track showcases a band coming into their own. “I’m extremely satisfied with the record and really proud of the work everyone did on it.”