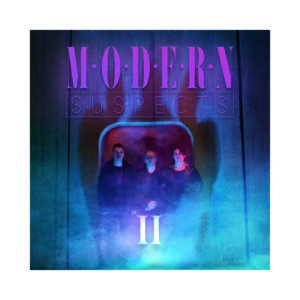 II is, as the name suggests, the second EP from the Denver based synth-pop group Modern Suspects. Formerly known as Claymore Disco, the band updated their guitar driven sound for a more modern, synth based sound and moved from a four piece to a three piece. The five song EP is packed with tracks that make you want to get up and dance alongside tunes with more personal lyrical content.

The first song on the EP, “Drift”, is about getting further away from your dreams and who you once thought you’d be. The opening melody and chorus contain a sound that a lot of people are familiar with: sampled vocals. Vocals samples that have been chopped and re-pitched are a mainstay of modern pop music, from songs such as “Sorry” by Justin Bieber to “Turn Down For What” by DJ Snake and Lil Jon.

The band slows things down a tad with the following track and leading single on the EP “Demons in the Night”. The song addresses self-doubt and being alone with your thoughts. The group vocals during the chorus have an anthem-like quality that offer solidarity, letting you know you’re not the only who struggles with the “demons in the night”.

“Terrified” picks things back up with a groovy beat layered with world percussion. They bring back the chopped & pitched vocals, along with some elements of EDM and a guest rap verse from OptycNerd. This song really is the “full-package” when it comes to being radio friendly.

II is a solid pop album from the catchy hooks and personal but relatable lyricism, to danceable beats and quality production. The band has been on the steady rise in Colorado, from playing big gigs to sold out shows. Be sure to catch a live show when you can!