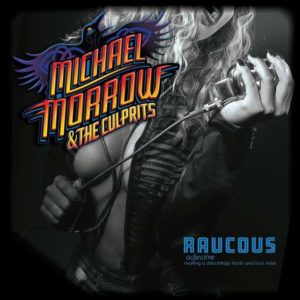 We have gotten some throwback/retro albums over the years at BandWagon from a lot of different genres, but one we never expected to get is a 1980s-style hair metal album. Michael Morrow & The Culprits’ Raucous is technically a debut album but Morrow had previously released a solo album, Bad Penny – which is very much an ‘80s metal album, bringing to mind Sammy Hagar more than Def Leppard. Raucous is relatively under-produced; it sounds like an unadorned three-piece rock-and-roll band with a distinctly ‘80s influence.

While definitely a take on ‘80s hair metal outfits, this doesn’t milk nostalgia or bring comparisons to better bands of yesteryear, which some “throwback” albums we’ve received in the past have been guilty of. Morrow and his crew, to begin with, are excellent singers and musicians that also have a bit of range. They don’t sound like a 90-percent-there, slavishly-devoted tribute band to an ‘80s hair metal band that no one remembers. Michael Morrow & The Culprits are their own thing with their own sense of style. Morrow, in particular, cites Southern Rock and Blues music as influences on his solo album.

This is apparent when it comes to some of the lesser-headbanging songs on Raucous such as “What We Leave Behind,” a bluesy, oddly tender love song to the singer’s girl that ends with a really good guitar solo. (Not that love songs are unheard of in hair metal; it’s just that they would be more explicit “lust” songs than love songs.) “Blue Skies” sounds like a Southern Rock-tinged hair metal song, and “No Good Reason” is an homage to one of 1994’s best films (Not Forrest Gump). The variety gives some flavor and personality to what could easily be just another throwback band, which makes Michael Morrow & The Culprits a good rock band full stop. This is not a nostalgia act; this is the real deal. Those that want a new ‘80s-style metal album to listen to, Raucous delivers.