In the early ‘80s, New York native/lead singer Perry Farrell fled the concrete jungle for the sunny side of the United States and landed in California. He wanted to pursue his love for surfing and music concurrently. While living in his car and waiting tables in Los Angeles, he formed the short-lived band Psi Com, which eventually evolved into an early incarnation of Jane’s Addiction. Comprised of core members Farrell and bassist Eric Avery, Jane’s Addiction spent the latter half of the decade building up a zealous fan base.

“I’ve always looked at music as a scene, especially live music. Live music really creates them. It has created scenes throughout history like in the ‘60s, ’70s and ’80s. The way people looked, what they were listening to, what their beliefs were and what they stood for was always centered around music or musicians were the center of conversation anyway,” Farrell says.

“I guess for myself I’ve always wanted to contribute to that scene, even before Jane’s started or when it started I should say. I looked at the music scene in L.A. and I wanted to get in there,” he continues. “I didn’t want to follow necessarily; I wanted to add something to it that wasn’t there, a hybrid if you will. A combination of punk and rock, that wasn’t really going on. It wasn’t really that hard to add something into it. If you look at what isn’t being done or what can be combined then you begin to see how you can contribute.” 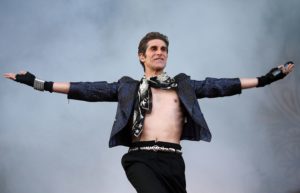 After three proper studio albums including 1997’s self-titled debut, 1988’s Nothing’s Shocking and 1990’s Ritual de lo Habitual, the band went into hiatus due to inner conflicts revolving around intense drug abuse. The next 10 years would bring endless lineup changes and an uncertain future for Jane’s Addiction. It wasn’t until 2001 that they would end up reuniting at the Coachella Festival and in turn, spark a whole new chapter. In 2003, they released their first proper studio album since 1997’s Kettle Whistle, titled Strays, which ended up being a huge commercial success, something that doesn’t really impress Farrell lately. His whole take on major labels (and the music industry, in general) has vastly changed.

“Right now, I’m not very happy. I used to look up to and wanted so badly to be a signed artist on a label. When I signed with Warner Brothers, it was during their heyday. They had artists like Madonna and Prince. They were legends. People like Frank Sinatra and Jimi Hendrix were some of the greatest talents that ever existed. In those days, I wanted to be part of that scene. These days, I don’t want to be a part of that scene,” he admits. “In the music industry today, they are still trying to sell music to kids that don’t freely download. They have very immature attitudes and outlooks towards the world. Those are the kind of artists they are signing; they aren’t signing sophisticated or great music. They’re signings have nothing to do with quality artists. It all has to do with whether they can sell, not even a record, they’re looking to sell hoodies [laughs].

“I like to say Jane’s Addiction was adult entertainment,” he adds. I wasn’t trying to write songs for little kids and be part of pop culture. I’m from the underground. My culture is a subversive, dark, exiting, fun, dangerous, sensual and all the things I’m attracted to. I’m not attracted to this little puffy, airy talk about my depression I’m having, that kind of stuff. I grew out of that when I was 10 years old. Today, what do you have? You have people that are singing about whatever, the club, a bottle of champagne and a big ass [laughs].”