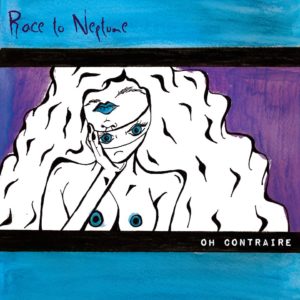 Oh Contraire is the first full-length release from Fort Collins rock band, Race to Neptune. Formed in 2012, the band has been a staple of the Fort Collins rock scene and now, with the release of their new album, they have a solid body of work to show for. The band has an overarching sound of 90’s alternative but they pull from a multitude of different influences that span a 30 year range, from the 60’s to late 90’s. What’s impressive about this album is the band’s ability to go from “in your face” riffs, to soft ballads, to even country while still staying true to their sound.

A couple of tracks that stand out on the album are “Iron Satire”, “Constant Collapse”, and “The Bayou Brew”. “Iron Satire” is the ballad of the album that perfectly encapsulates nostalgia. The song really showcases guitarist and vocalist’s Brian Maier voice as well as his lyrics that nicely complement his songwriting. On the other end of the spectrum, “Constant Collapse” is the banger of the album. While channeling the likes of bands such as Nirvana, Soundgarden, and Tool, the bands delivers an electric performance as playing heavy is something that this band seems to do really well. The appropriately named track “The Bayou Brew” is the most upbeat song of the album and is sure to get even the most heavily intoxicated patrons at the bar on their feet. The band combines their rock sound with some electric, stomp your feet, backwoods country for a highly lively combination.

Oh Contraire is a solid, full-length release that features the band’s wide range of influences. If you’re a fan of 90’s alternative, you will certainly dig this album.