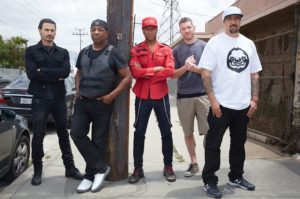 The United States is currently in a state of emergency. Fresh on the heels of the police shooting deaths of Alton Sterling and Philando Castile, and the massacre of five Dallas police officers during a Black Lives Matter protest, the Prophets of Rage supergroup could not have surfaced at a better time. Coupled with an intense political race between presumptive nominees Donald Trump and Hillary Clinton, Prophets of Rage are urging people to get off the sidelines.

“From the mind of Tom Morello, who I strongly agree with, I think this was a thing that is rooted in the Rage Against the Machine tradition,” Chuck D says. “We want to be able to take protest and culture, and put it into some kind of consciousness. We felt like what better place to be and what better time than now?”

Trump and Clinton have pulled the wool over the majority of American’s eyes. On one hand, there’s a racist, egocentric maniac and on the other, a woman who has been enveloped by a storm of controversy surrounding her questionable level of honesty.

“Trump-Hill,” as Chuck D calls them, haven’t fooled Prophets of Rage and as true anti-conformists, they are intent on delivering the truth behind the antiquated two-party system as loudly as possible, hopefully influencing more of the public.

“I think politics will follow us,” Chuck says. “The jackass and the elephant are going to try to do whatever they can to find votes and we want to educate those voting. But you have to be aware of the times you’re in. Don’t be a puppet and don’t be shallow about what’s going on. That’s the bottom line and we’re raging against it. It’s been a Rage Against the Machine tradition. Myself, B-Real and DJ Lord totally salute the movement.”

“We have a really fucked up system,” Commerford adds. “The electoral college is something I’ve never understood. It doesn’t make any sense to me and seems like a way to prevent America from getting the person they really want to be president. At the end of the day, you have these swing states that are ultimately going to decide who’s going to be president. I just think it’s fucked up. It needs to be smashed. I love that. I love trying to use music to do that.”

In what could be the most divisive elections in history, Chuck D doesn’t plan on supporting either candidate while Commerford offers a unique take on voting that somehow doesn’t really sound that far-fetched.

“I know people don’t like to hear this, but I believe voting on the city level,” Commerford explains. “I’m 100 percent behind that. I do not believe in voting for president. You have to have millions of dollars to run and you get those millions of dollars from the same corrupt corporations, and you owe them favors. It doesn’t matter if you’re George Bush, Barack Obama, Hillary Clinton, or Donald Trump. You can go around saying, ‘I’m going to pull the troops out of Afghanistan and I’m going to shut down Guantanamo Bay, I’m going to build a wall’—at the end of the day, you’re going to do what those corporations are paying you to do. They’re all shades of the same color.”

“I liked what Killer Mike was doing when he was working with Bernie Sanders,” Chuck D adds. “I think he’s great. The concession to Hillary hurts, but also we knew the limited two party game in the U.S. makes it a game of numbers. Unfortunately, it’s a game of math—if you don’t vote for one then the asshole gets it. That makes you look at this pre-historic two party system like something that just doesn’t work. If I had to vote for anybody right now, it would be Cynthia McKinney or Rosa Clemente—I’d vote for them.”

As Prophets of Rage continue to put politicians on blast and advocate for change, the message the group conveys through its music is a call to action.

“The basic idea is to stay loud, stay vocal, stay woke,” Chuck D says. “Nobody’s saying in order to fight the power you have to get on the front lines. It’s not the century for that. Most human beings are unprepared to get out there and sacrifice themselves doing some primitive fighting, holding a bayonet and shit. Stay loud, stay woke—if you know better, say better. Don’t truncate your beliefs for somebody who’s dangling a job in front of you or something that looks to be the fruit that takes you a little further. Stay woke, stay you.”

“We are in a violent time,” Commerford adds. “We are in a war—even though we’re not officially in a war, the world is at war. My weapons have always been my instrument, distortion and noise. That’s what we’re doing. We’re waging war with our music, which is a universal language and this is a time when we’re needed.”