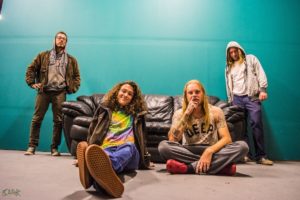 Take the hooks from the best music of the 1960s, hand them over to an EDM outfit with a couple good singers/guitarists, and you would get Fun-Land Express, the fifth album from MISCOMUNICADO, a Fort Collins-based EDM/Psychadelic Rock fusion band that originates from Philadelphia, Pennsylvania. They call their music “Future Classic Rock,” and the artists they also like, they only answer “Everything.”

MISCOMUNICADO distinctly takes its cues from ‘60s rock, remixing the sound to a dance beat. That’s not to say they just sample the hits Baby Boomers will talk your ear off about; vocalists Dan Scott Forreal and James Thor are also guitarists, and very good ones at that. (Forreal also works the keys while Thor is also a bassist.) Luke Barone, credited as “Live Sound Director,” takes Forreal’s and Thor’s work and gives it a futuristic vibe with the electronic beats and sampling of various sources.

In general, it’s hard to pick a favorite track, though “Catalina Wine Mixer” is a really energetic, fast-paced track. It sticks out on the album given that the other tracks are laid back in a Jimi-Hendrix-plays-The-Star-Spangled-Banner-at-Woodstock kind of way. Fun-Land Express sounds like an awesome once-in-a-lifetime jam session between a DJ and a pair of guitarists/singers that someone happened to be recording. It’s almost too much to take in the first time you listen to it. The album closes out with “Birth Day,” a relaxing, ten-minute-long song that brings to mind Carlos Santana at times thanks to the guitar work.

MISCOMUNICADO’s Fun-Land Express is worth listening to from start to finish, and you should track down a live show after finishing the album if you can. This is a standout album. For more information, visit http://www.miscomunicado.com.