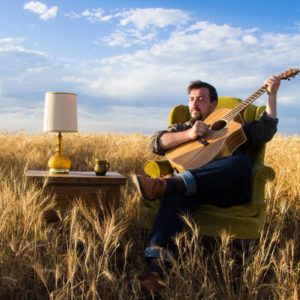 Igaus Davis, real name Matt Davis, has a story relatively common in the emerging Greeley music scene. Like many musicians in town, music was more or less a hobby until they started going to shows and seeing some of the bands coming through on tour. The collective thought from local musicians seems to have been, “Wait, I can do that.”

After seeing what many of these musicians had done, Davis decided to go for it and record a collection of the songs he had written. “One of them I had written about four years ago, the rest I had written in the last six or seven months. I didn’t really take myself seriously as a singer songwriter, and I guess I still don’t, but I wanted to get these recorded,” says Davis. Recorded at the University of Northern Colorado’s studio with Michael Olivier, the final product is crisp and full.

The six-track EP titled Too Fallow, Too Long, is a series of songs that surprises with both their musicality and depth of lyricism. Channeling singer songwriters he admires like Gregory Alan Isakov, Davis set out to paint a picture for the listener.

What’s most intriguing about the album is the strength of the instrumentation. Writing most of the horn parts himself, Davis displays an understanding of the language of music at a fundamental level. The use of vocal harmonies, banjo, upright bass, and horn arrangements gives the songs a breath that lifts it above the average folk album.

As the for the name Igaus, Davis struggled to find a new name for himself as there is already a Matt Davis established in the music business. Instead Davis took a different route. “There’s this kid I know, he’s two years old. His name is Isaac but he can’t pronounce his name so he called himself Igaus, and I thought, ‘That’s great, I don’t know anyone named Igaus.’ So I stole that kid’s name and I told him to go get a new one,” says Davis half-jokingly.