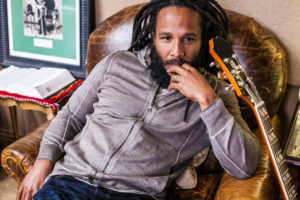 As the eldest son of reggae icon Bob Marley, Ziggy Marley had impossibly large shoes to fill. After his father’s untimely death in 1981, the young Marley was left to continue his father’s legacy, one that began in the early ‘60s. Through his music, Bob Marley called for political and social reform, spoke out against injustices and soothed the souls of countless fans. It was a daunting job, but the seven time Grammy Award winner has managed to slide into the role with ease.

Ziggy—born David Nesta Marley in 1968—was only 13 when his father passed away. At this point, the Kingston native had barely started to dabble in music with his group The Seven Do Bees. He went by the name “Freddie Dic,” but that name never stuck. Instead, he started going by Ziggy, a nickname his father had given him. (In Jamaica, Ziggy means “little spliff.”)

In 1979, two years before his father died, Ziggy formed The Melody Makers with his siblings, which included Stephen, Sharon and Cedella Marley. It started him on the long road to international stardom and an illustrious solo career. Ziggy’s latest album, Ziggy Marley, is his sixth studio album and it’s a Ziggy creation in every sense of the world.

“I produced the whole record,” Ziggy says in his unmistakeable Jamaican accent. “We worked with other producers in the past like Scott Litt, Don Was and a few others. I knew the direction I wanted to go with my music and the producers are there to help us along. But my last few solo records, I produced by myself. I’ve gained a lot of experience and learned from a lot of people throughout the years. It helps to work with other people, too.”

As a Marley, Ziggy has been able to work with some of the entertainment world’s most talented artists and producers. It’s not surprising he’s able to produce his own music, having learned from some of the best, although it wasn’t exactly simple. In true Ziggy form, however, there was a lesson to be learned.

“It had its ups and downs,” he says. “It was a challenge, but it was a good challenge. It takes patience. It takes open mindedness. You can’t let the ego get into your decisions and stuff like that. It’s a good exercise.”

It’s hard not to compare Ziggy to his father. Their voices are eerily similar and they look nearly identical. It’s almost like Ziggy is the very embodiment of his father’s spirit.

“Let’s say I get some food in my tooth and I pick it out,” Ziggy says. “They say, ‘Look, he picks out that food just like his father [Laughs].’”

“What is most important is to love each other,” he explains. “If I was to define it, my version of it could be different from somebody else’s. My version is just love. Somebody might have more intricacies, but love is the root and that is the real thing.”

On stage, Ziggy seems to be possessed by the music. He often does material from Bob Marley’s catalog in addition to his own. With his signature dreads and vintage fashion sense, he commands the crowd almost like his father is there guiding him along.

“Just like my father, there is a presence I feel,” he says. “Whether it’s my father or not, is not such an identifiable thing, but there’s a spirit there. I think it’s not just about me connected to my father. I think a lot of us who have open minds and who are willing to accept things beyond what scientists can prove [laughs] have had experiences that let us think there is spiritual things happening. You know, I’m sure my father experienced it, too. I don’t know if you were to ask him, ‘Hey Pop did you feel the spirit…” of who, I don’t know [laughs].

“I think the history of the universe my father is now a part of,” he adds. “The ideas we are inspired to speak and sing about are inspired by these spirits. He’s a part of the whole; he’s not a part of the singular. We feel that wholeness I would say.”

When Ziggy speaks, there is always a lesson to be learned. He speaks with such positivity, awareness and enlightenment, it’s easy to forget he’s human. When he’s met with hardship, he offered a very simple solution to overcome any obstacles in one’s life.

“I accept it,” he says. “It is what it is. I accept it, but I try to find a way to move forward and get out of it if it’s something I need to get out of. Or something I need to move forward and get my life going again. I’ve been through some difficulties, and a lot of songs were written because of difficulties. I’m accepting of circumstances and situations I get myself in.

“In my life, and this is not for everyone, the experiences I’ve had in my life everything has happened for a reason or a purpose,” he continues. “If I’m jogging on the trail and my shoelace gets untied, there’s a reason why my shoelace got untied. Those couple seconds where I stopped to tie my shoelace, something changed. I’m where I was supposed to be, tying my shoe. You’re there fixing your tie now because that’s where you’re supposed to be.”