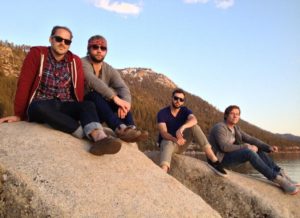 It’s safe to say The Epilogues have put in their time in the Greeley scene. Ten of the last twelve years they have been a band they have regularly made the trip from their home in Denver to play for the local scenesters. While they have rode the rollercoaster that is the professional music business with both extreme highs and extreme lows, Greeley has been inconsistent with its appreciation of the band. Having personally been to probably several dozen Epilogues shows, I have seen a hundred people turn out on some nights and five people turn out on others. Part of it is the somewhat spoiled nature of Greeley concert goers who have the best in Colorado music presented to them and it still not being good enough to buy a ticket, and The Epilogues not having a sound that resonates with a secondary market like Greeley where there is less experience with live (and different) music and more experience peering through the pop filters of the internet.

Now, after twelve years this Colorado staple is closing the book on their time as a band. After getting accepted into the Berklee School of Music in Spain graduate program, vocalist and guitarist Chris Heckman approached the band unsure of how to feel or what to do next. “I knew something was up when Chris called me. Chris never calls and is like ‘hey man, can we talk?’ Chris is very reclusive; usually we have to drag him out of the house. The fact that he was trying to get a hold of me I knew something was up,” says keyboardist Nate Hammond. According to Hammond, Heckman spoke with him about the grad program and his apprehension about where the band would stand. “Immediately we were like, ‘dude, you need to take this opportunity.’ I don’t think anyone was telling him not to do it.”

It is important to note that the overall impact of these four friends can’t be measured in national record sales. While The Epilogues did have a large recording contract within reach only to have it taken away, The Epilogues in their twelve years of being one of Colorado’s most influential and respected bands stands as not only an example of the times but an example of the dedication necessary for a local band to break out. How many Colorado kids picked up an instrument because of an Epilogues show? How many local musicians saw them do what they were doing and decided they wanted that too? In today’s era of front pages and timelines it’s easy to clump their successes into a subcategory of one hit wonders and locals who “almost made it”. But The Epilogues were beyond that. The Epilogues made the music they wanted to make and not only did they not apologize for it, they pushed it harder than most bands are willing to do.

Most widely known for their hit “Hunting Season” in 2012, The Epilogues were making all the right moves. When we had them on the cover of February issue in 2012, they were just finishing a sold out tour supporting AWOLNATION. They released their full-length album, Cinematics, and things were on the up-and-up.

“I think a big moment for us was selling out The Gothic when ‘Hunting Season’ was in its prime. Having 1,300 people singing along to the words is a phenomenal feeling,” says Hammond recalling some of the good experiences they had as a band.

But when it comes to the bad moments for the band, according to Hammond there is one moment that the band unanimously agrees was the worst.

As they were truly establishing themselves as a national band after the success of “Hunting Season,” they began to be courted by several record labels. Deciding to go with Sony as they had the best offer on the table, everything was lining up. Then, much quicker than it came, the head of the label who was going to sign them left town for a week, and in that time Sony decided to downsize. As a result, Sony parted ways with The Epilogues before they could get their foot fully through the door. “In one week we went from getting ready to sign a $500,000 contract to getting it revoked because Sony wanted to go in another direction,” says Hammond.

The result was a huge setback for the band right when they were hitting their stride. But while this would destroy most bands, The Epilogues decided to stick it out, and did so for five more years. Now as things come to a close, instead of ending things outright as many bands have a tendency to do, The Epilogues decided to simply enjoy their final hours as a band before their final show on August 19th where they will also be releasing their final album.

Looking back, Hammond has two pieces of advice for young musicians who want to make a living doing it. One, don’t complain, ever. “If the van is hot don’t complain about it. Everyone knows the van is hot.” Second, “Go be a fucking doctor, it’ll be easier. At least you’ll have a syllabus, there is no syllabus to being a professional musician.”